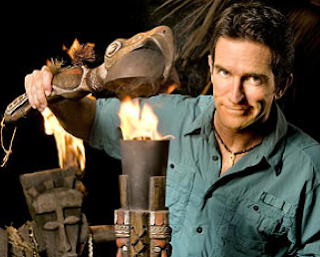 In the summer of 2000 a new television reality show hit the airwaves. The show details a game of physical and social challenges where a group of "castaways" both align with and plot against one another so as to become the "sole survivor" and the winner of a million dollars. For years afterward, it would generate numerous jokes of "getting voted off the island" or realizing that "the tribe has spoken". Anyone who knows me well knows that eleven years ago, Survivor quickly became my not-so-guilty weekly pleasure.

Now if you have begun rolling your eyes or thinking that you are so much cooler than me because you wouldn't be caught dead watching this kind of trash on television, if you are far too intellectual or otherwise "enlightened" to enjoy such drivel, then click out of this blog post now. I'm serious. Go away. Get off my island. There's no room for the sanctimonious here.

When my husband and I began watching the show, our children were young and we would not allow them to watch it with us. With its motto of "Outlast, Outwit, Outplay", we deemed the contestants' confessionals and the strategic plotting to be a bit too much for them. However, in the years to come, our kids began watching the show with us. Whether they were joining us for the show's relay games or puzzle challenges or simply to share in our conversations about the contestants, I am not completely sure. They haven't watched every season of course and they are certainly not as addicted to the show as their mother is, still, it's a regular ritual for us to all gather at the TV each week in hopes that our favorite contestant (currently veteran Survivor player Boston Rob) will make it through another week.

Years ago, the show became a source of inspiration for an impromtu game of Survivor at an extended family get-together at my folks' camp. Every 10 minutes the large group of adults began voting someone out of the living room. Banished to the back room where another party started, the silliness was spontaneous and hilarious. To this day it is one of my favorite memories of spending time with my brothers and their families. I also began designing Survivor-inspired activities within my classroom. My Drama class created a Survivor video spoof and we've created confessional-style monologues in Creative Writing.When I tell my students that I have watched the show since its first season, they are amused. Often I find a fellow fan of the show. I suppose it's safe to say that their English teacher is a bonafide Survivor junkie.

Each week I look forward to the 60 minutes of competition and scheming. It's all in good fun. It's now family entertainment; we all enjoy studying each contestant and making our prediction as to who will become the season's winner. If you're a fan of Survivor, you're bound to be the kind of person I'd enjoy sharing an island with. Not a fan? Have a problem with the show? Well, I'd love to think I could talk you into giving it another chance, but you know what? I'd rather not. Instead, I choose to vote you off the island. Go find your own guilty-pleasure. The tribe has spoken.
Posted by Anne at 10:59 PM