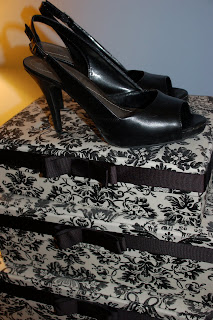 I've never been too disappointed with my short stature. At a bit under 5 feet 4 inches, I rather enjoy the fact that I am short. I can move myself through crowds rather easily and I always have plenty of leg room in the smallest of cars! Not to mention, I have a built-in excuse to ask a nice looking guy to help me reach whatever I need on a high shelf. Unlike my daughter who was quite sad to learn her short height would prevent her from ever being a Rockette, I never had any dreams of being tall. Still, from the time I was in middle school, I loved wearing heels.

I had one bad experience walking in them however. Back in the 7th grade, I strode past three male teachers who were on duty in the hallway. Just when I thought I was impressing them all with my brand new Candie's sandals giving me three extra inches and an abundance of preteen sophistication, I slipped and fell right in front of them; my skirt flew up, and my pride sank. I can still see the three of them chuckling while asking me if I was okay. So embarrassed and red faced at the time, I've never forgotten it.

However, by the time I reached high school, I was a professional wearing shoes that were ridiculously high. I had wedges and boots and sandals and pumps. I had them in every color imaginable too. But as I grew older, went off to college, got married, and began a family, heels became impractical. I traded in my Candie's for sneakers and cute ballet flats that allowed me to chase toddlers and runaway pets.

Yet in recent years I have found myself returning to high heels. Despite the ease of wearing flats, there is something about the way my legs look in heels and yes, the appearance of being a few inches taller makes me feel sophisticated, sensuous... sexy. Of course the fact that I may teeter on slippery floors like a baby giraffe just learning to stand makes me less attractive, I am sure, but after all, I no longer wear heels to impress the guys.

Well...that's not altogether honest. I still like to impress the guys. Just this morning in fact I thought I was impressing my son Paul when I came downstairs wearing my new open toe heels. Paul looked at me and said with a stern tone of voice, "Mom! Can you drive in heels?" I found myself smirking. I replied smugly, "Yes, Paul. We women are talented like that". But before I could enjoy my retort he added, "No Mom. I mean, is it LEGAL?!?!"

Once again, my sophistication took a flying leap. It was as though I'd fallen right on my rump in front of those three male teachers again. The only difference this time around however, is that this time, I was the one chuckling.
Posted by Anne at 11:18 PM