I tried kicking the habit a few years ago. I did pretty well too. I gave it up for about two months. Then I had one more and that was it. So much for the abstinence. I am weak.

I remember feeling bad about my addiction. I spoke to people about it. But a woman named Dawn did me in. "Seriously", she said. "What other vice do you have?" It did not take me long to answer. "None", I replied. "Look at all you do. Look at all you accomplish, all you are responsible for! You deserve this. Have it!! And enjoy it", she said. I swear, it never tasted quite as good as that day when she gave me absolution. Oh yeah, I suppose I should add that Dawn has probably kicked the habit herself now. I don't dare check in with her. Last I knew she was running marathons or same damn thing. I should have known she'd bury me. She seduced me with all that talk of the things we had in common, of how much alike we are. She said she needed the drug too. Well, you don't see ME training for some triathlon do you?! Dawn! You left me eating your dust!!

I have preached to my children to "Do as I say. Not as I do". I've been successful so far with two of the three. But I spot Sydney sneaking into my stash when she's home on break. She swears she doesn't touch the stuff when she's at school, but she sure makes up for it when she's home. I hope she'll learn from my checkered past and get clean while she's young.

My husband is little better than I. He sneaks it home himself. I see him coming in with it and I shake my head. Sometimes we even fight over it. It's a dirty, dirty habit. It causes you to get selfish. I've even hidden it from him when we're running low. And just when I think I can kick the habit, he buys me some. He thinks he's doing it out of love. I know better. He's trying to make sure I don't get clean. Misery loves company after all. 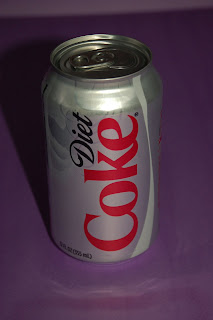 I know it's not good for me but it's my drug of choice. It's my coffee. It's my beer. Pizza isn't the same without it. But then again, neither are tacos, crackers and cheese, or an ordinary sandwich. Other vices come close but they never win me over completely. Raspberry lemonade in the summertime while out on the dock may tide me over for a little while, but during the school year at least, it's tough to stay sober. I just can't live without my drug of choice. I just can't live without my diet coke.
Posted by Anne at 6:24 PM