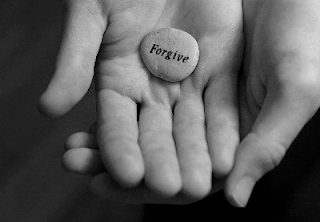 I have been giving a lot of thought to the concept of forgiveness lately. People can be quick to say “I'm sorry” but despite the apology, some people return to the acts or to the behaviors they have expressed contrition for, time and time again. Didn't they say they were sorry? Didn't they mean what they said? Did they think that they just needed to spit out those words and that would be the end of it? Perhaps the apologies are given without sincerity or intention to change. Perhaps it's an expression of self-preservation or protection on their part. I don't know. What I do know is that it's up to me whether or not to give forgiveness despite the other. I cannot give sincere forgiveness with an expectation that the other person will be true to their apologies even if they make a promise to change.

In the recent past I have become wiser on the subject of forgiveness. I've learned through times of hurt and disappointment that I cannot control what another says or does. I can only control my own reaction. It's not easy to let go of the hurt and disappointment, but in order to move on and to be free of the pain, it's vital to give forgiveness. With that said however, I will not be played to be a fool. I have learned the difference between forgiving and doing what is necessary to continue protecting myself and my loved ones from future harm. People in my life have stolen from me, have conned me, have spread lies, and have mocked me. What they do not to me but to my loved ones pains me more. I remember my father suggesting to me years ago that I become a lawyer. He realized early on that I have a strong sense of justice and a desire to fight tooth and nail for the underdog. But I did not need to become a lawyer to stand up for others, or to stand up to others.

What I have tried to do to move closer to forgiving those who injure me or my friends or family is to try and understand the perpetrator's path towards the act or words of wrongdoing. Sometimes I can guess at what has brought the other person there. Other times I really have no clue. And to be honest, sometimes I really don't care to know. I just need to move on, away from that episode, away from that person. I can forgive while acting on my own impulse to protect myself or my loved ones. But sometimes forgiveness can not be given immediately. In some cases it may take weeks, months, even years before I can reach the point where I can forgive. I strive to offer it sooner rather than later, but forgiveness is often a process, and unlike one's insincere “I'm sorry”, my acknowledgment of forgiveness, often kept within my own heart or mind, must be sincerely offered. I will not stand for anything less for myself.

Lest I sound judgmental here, I should add that I have many conversations about this subject in prayer. When I begin to pray for the person who has wronged me, God begins to offer me new eyes to see and a new heart to care for that person. As I pray, I start to see that person as God sees them, I also see myself just as guilty of sin and failure as the other person. I too am in need of forgiveness. None of us is perfect after all. When I grow frustrated over wrongdoings or insincerity, I realize that it is God who is to deal with the injustices. It is not up to me to carry the anger.

Actions speak louder than words. I've always believed that to be true. Perhaps when I decide to forgive one who has injured me, my act will hopefully shout out to others that they might do the same, to forgive. Maybe then they'll move towards their own understanding of self and others. Perhaps they'll learn that the first person they need to forgive is the the one who has done them the most injury over time, the one they see in the mirror. It's something I push myself to do often.
Posted by Anne at 9:51 PM