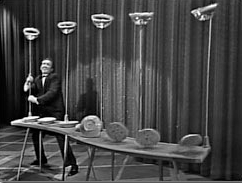 When I was little I used to love watching "The Mike Douglas Show". There are two particular acts that I remember vividly. One featured Eric Carmen singing his hit song, All By Myself. Unless I am inventing this memory, I recall him crying at the end of the song as he had just recently lost his mother. The second act from the show was one of a man spinning plates. Spinning plates is a circus art where a person spins flat bottomed bowls or plates on wooden poles, running from pole to pole in an attempt to keep all the plates spinning at one time without any crashing to the ground. I was always fascinated by this act when I'd catch it on tv. I would feel relief when the performer was successful and I would gasp if they were not.

I often think of these two acts from years back. I think of the vulnerability and emotional heartbreak of Eric Carmen on national television and I often liken my juggling of responsibilities to the fear, excitement, and sometimes horror of spinning plates. I don't wish to fail. I don't want to fall apart when things become too much to handle. I don't want any plates crashing to the ground because of my inability to see which plates were wobbling and needed attention.

Lately, it seems I have had too many plates to keep track of. I don't often reach a point where I am overwhelmed by my responsibilities, but that has been the case these past few months. I used to pride myself in all that I was able to handle. Yet recently, like Eric Carmen I have cried while on the stage of my classroom. You can get away with that once in a while but of course, you need to have resiliency and the focus needs to be on the work of the day with the teens I teach. So crying on stage cannot happen again and again.

And now I am spinning plates and doing my utmost not to drop any. One plate is filled with my correcting of school papers. What needs to be scored first? When can I get this batch of work graded? Another plate is filled with my planning of the next day's classes. What do I need to read or research? Is the syllabus updated? Do I know what we're doing tomorrow? A third plate is filled with new initiatives I've been expected to lead at work. When am I being sent for training for this new course? When do I need to have the course outline written? A fourth plate is filled with home finances now that we have a daughter in college. How many more payments do I have to make? When are our taxes due? A fifth plate has my three children on it and a sixth plate carries our foreign exchange student. Where do they need to be for their activities? How are they doing? A seventh plate is loaded with concern for my aging parents. An eighth plate is filled with what I need to do to maintain my health. A ninth plate has my hopes and dreams for my marriage and family life. A tenth plate holds my unfulfilled personal goals. I could easily list additional plates but these ten are those which must be kept spinning at the current moment. Besides I'm already growing weary over this long list of ten plates.

When I read of some individuals who embark on a trip to other countries such as Elizabeth Gilbert's travels described in Eat, Pray, Love, I think to myself, "Wow, how incredibly self-indulgent"! Then I stop myself. I cannot judge another because I know that every single person has their own plates to keep spinning; it's all a matter of perspective after all. I have convincingly less serious concerns than someone battling a debilitating condition for example. I have my physical and mental health as does my husband and as do my children. That's huge. And I have a circle of friends and family members who love me and who support me. That's not to be taken for granted either.

I believe that I know what I need to do. I need to take a few dishes off the wooden poles and put them safely on the counter for a few days, wrapped in a protective cloth or some of that fun bubble wrap. I will not abandon them completely and I will not let them crash to the ground. But I do need to get control over them. I need to ask a few people to spin a few plates for me, temporarily. I'm sure they will be more than willing to help out. And I need to take a little time to cry, to relieve stress, and to strengthen my resolve to find better balance. I can relate to Eric Carmen crying after singing his song on national television. But unlike his song lyrics suggested, he was not all by himself. Thankfully, neither am I.
Posted by Anne at 8:12 PM