One of the Good Guys 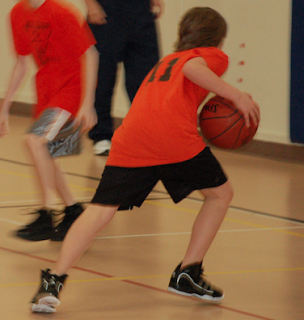 Mom? Could we please leave at noon today so we can get there in time?

Paul's game was not until 12:45pm. It only takes 10 minutes at the most to get to the Middle School where his 5th grade team plays. Still, I did my best to get his cheering section out of the house in time so he'd be there early. He didn't want to be late. He wanted to make sure he was there in plenty of time for his team. 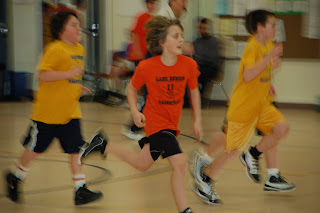 It's fun to watch his basketball games. Seeing him enjoying his team and growing more confident as a player, I'm happy to be there in the bleachers supporting him each Saturday. He's happy to have as many family members as possible there watching him each week. Today with his Dad and a sister away at theater activities, his fans were fewer in number, but we took in his hustle on the court and his solid defensive plays. We snapped pictures and clapped as he took a few shots. He's quick to run to get open but he is also apt to pass the ball to others, so we followed his coach in encouraging him to shoot himself. He did. It didn't go in today but he does okay most days, landing a basket or two. He's not one to rack up the points though.

What impresses me the most however in watching my eleven year old boy play basketball is how very aware he is of others on his team who have not yet handled the ball. He seeks them out, stalling long enough for them to get into position so he can pass them the ball and give them a shot. It fills my heart with such pride that he is more interested in seeing to it that everyone gets their chance. 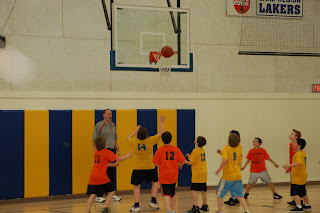 At one game a few months back, a group of his peers were in the bleachers waiting for their own team to play the next game. One boy who I did not know suddenly started talking about my son to his friends. "See #11?" the boy asked, "That's Paul. Paul is awesome!! He's really AWESOME!" There was a sincere tone of respect in the boy's voice. My daughter and I looked at one another and smiled. This is a common happening. Paul is often spoken of as being "awesome". And I know that despite his steady improvement as a basketball player as well as a soccer player, it's his conduct on and off the court or field that makes his peers say this. Paul is genuine, one of those people that the boys consider a "guy's guy", and a boy that the girls like too. Despite his young age, at 11 he has already established himself as one of the good guys.

After his game today we made a quick trip to the store. Looking over tee shirts I saw one that read "Nothing but net" on the front. "Paul? Do you like this?" I asked. He took a look, crinkled up his nose in disgust and told me straight out, "Mom, I don't like shirts that say, Oh! Look at me! I'm awesome!" I had to laugh. No, I should have known better. The awesome ones don't want shirts like that. The awesome ones are those who have what my son has. Humility.
Posted by Anne at 9:58 PM