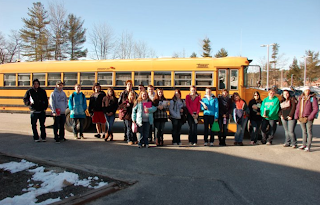 Today I boarded a school bus with 20 teenagers. For a third time in two years I took a class of creative writing students out of the classroom for a day of walking, writing, and sharing. It was a day filled with sunshine, artistry, and fine company.

We began with a walk down the city street. This group of small town teens immediately started commenting on everything they liked about the landscape. One chatted about the old buildings mixed in with the new. Another commented on the cobblestones at our feet. Yet another grew excited at the pulse of the city, so alive and energizing. I smiled and shared that I'd fallen in love with my husband exploring this city over 25 years ago. I well understood their feelings as they took in all the new sights and sounds. 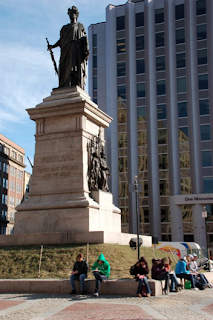 We stopped at a city square to sit and look for inspiration. We took 15 minutes to write. Some teens sat near the big statue. Another appeared right at home on a bench. Yet another leaned to write against a concrete barrier. The sun was shining which was welcomed as the wind picked up, but after writing we took time to share a little of what had inspired us there. After each person shared we abided by the rule to say only two words in response, Thank you. 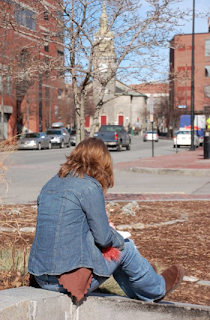 We moved to another city block; this one had views of a little church with red doors I noted. As I snapped pictures to record our day, again the teens continued with the process--to sit, to write, to share. They were committed to writing. It was beautiful. We moved on in our writing marathon, heading down to the waterfront. We stopped in at a small cafe and realized it was the one owned by an old friend we all knew, a former teacher at our school who had left teaching just a few years earlier. It was a beautiful and fun surprise to see him again. As we moved on, we met a lovely woman who warned us about being on the docks but who invited us onto the deck area of her business. She welcomed us to stay as long as we wished. This is the power of being a writer. People want to accommodate writers! We took time to write and to share again then we moved on to the art museum. 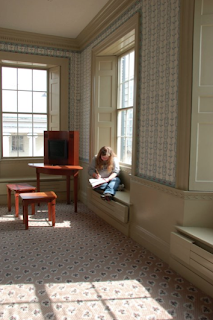 At the art museum we spent roughly 80 minutes exploring works of inspiration. The teens were free to browse at their own pace and took time to sit and to write again, being inspired by the art they were drawn to. The museum's Victorian house was a favorite spot for some of my teen writers. They wrote while sitting on the grand staircase; they wrote as they sat in the sunny window seats; and they found other nooks in which to write. 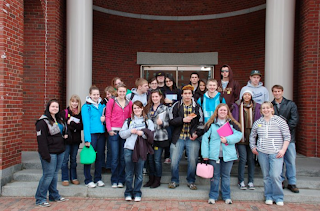 As we prepared to board our bus back to the school we took one final group picture. Because out of everything new and fresh to us on our field trip today, as exciting as it was to leave the classroom to venture out to the city for the day, amidst all the new sights and sounds of inspiration, I think we each realized where the greatest amounts of inspiration can be found...within ourselves and within each other.
Posted by Anne at 10:28 PM