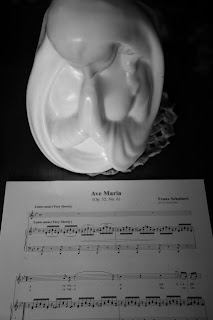 My cell phone rarely rings when I am in class. My children know I cannot answer their calls during the school day so they might text me, but they never call. In fact I rarely even have my cell phone within hearing distance when I am at work. However yesterday, situated in my pocket, it began buzzing. I was proctoring a study hall so I reached in to see who was calling me. “Mom Dad Home” the message read. I walked directly out to the hallway to answer the call.

“Anne? This is your father” (as if I might not recognize his voice). “I just got off the phone with Michael Delahanty. Could you sing Ave Maria tomorrow at Pauline’s funeral Mass?” Dad knew I was on my way to my hometown after work that day. I had my bag packed and in the trunk of my car. I’d gotten an email the previous day telling me that our dear family friend had died. I knew I would go to the Mass. I wanted to be there for her family and to represent mine.

I looked out the big glass window at the end of the hallway near my classroom as I listened to my Dad. I did not even pause to think of how I might manage to do this without any music or practice time. I immediately said, “Yes”.

I had only one real concern. Being such a cry baby, I worried I might not have the composure to sing. However, as the funeral began the following day, I knew I had to steel myself not to cry. It was important to me to sing the song as best I could. I began practicing my usual trick, driving my fingernails into the palm of my hand. For some reason, inflicting a little pain by pinching myself helps stave off my tears when I need to. It’s strange, I know, but it worked. I got myself through the classic hymn and sat back down next to my parents.

At the funeral reception Pauline’s son Patrick shared with us all a miraculous story of how the Funeral Mass of Christian Burial had come together despite an initial lack of a priest to do the service--a ray of sunshine had directed Pauline’s grand-daughter to find an available priest several towns away. The grand-daughter had answered the call and had found her grandmother a priest for her funeral. I also learned that Pauline had planned out the details of her funeral many years ago, writing her eloquent obituary 10 years earlier. She had also personally requested the songs sung at Mass including Ave Maria. Ordinarily a local cantor at the church would have done the honors, however that lady was out of town this week. The guitarist told me the cantor’s daughters could not do the difficult song, and that upon hearing that I’d agreed to sing they remarked it had been a blessing. “It was meant to be”, the two daughters told me later.

It was a great blessing and honor for me to have been asked to sing today. As I was thanked in numerous hugs from each of Pauline’s children, and as I felt my parents' pride, I thought to myself only one thing. I am so happy I answered the call.
Posted by Anne at 10:35 PM