A week ago, before leaving to return back to college after her two week spring break, Sydney remarked what a "cool younger brother" she has in Paul.

As my son's basketball season ended today he walked up to his older sister Emma to say "Thank you for coming to a lot of my games this year".

A few minutes ago, I heard Emma calling her older sister Sydney on Skype to ask her which outfit she should wear on her date tonight. 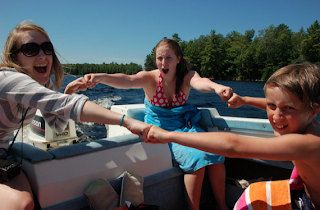 My three children have their squabbles of course, but their relationships with one another are incredibly strong. They have years worth of inside jokes and they continuously make each other laugh. They take time to listen to one another also, and in times of sadness, frustration, or stress, each is quick to lend support. What joy they bring to this house! What joy they bring to my husband and I.

With 3 years 5 months between my first two children, and with Paul coming along 4 years and 5 months after Emma, perhaps the spacing between each child had something to do with their security in and their enjoyment of one another. I don't know. But I do know that my kids have always been close. They have been one another's best friends for much of their lives. I remember thinking that Sydney was the center of Emma's universe when she was a baby. And when Paul was little, Emma was his constant playmate and Sydney was his protector. Sydney as the oldest set the tone; she's been an amazing role model for the younger two. Yet Emma as the middle child has been flexible and loyal to each of her siblings. Paul the youngest, values each relationship he has with his two sisters. He has a maturity beyond his years which makes that easier.

The past several months have brought many unique challenges to our family. Yet despite the trials, the five of us have come to realize how incredibly strong and loving we are as a family and we've pulled one another closer. Tough times have taught us how very lucky we are to have had such peace in our household all these years. Knowing this is not the case for all families, I will never take that for granted.

Years ago people told me how very lucky I was to have my children getting along as well as they were. One woman told me, "That'll change as they get older. They'll grow apart. They'll stop playing with one another and their friendships with others will come between them". I don't think I had much of a response to that at the time. But I remember thinking, "We'll see. We'll see about that". Well, I am going to hold on to the memory of how tightly Paul hugged his sister when she came home for the holidays, and I am going to remember how proudly his sisters watched him play in his basketball games, and I am going to scoff at anyone who dares question the solidity of these three siblings.

There is nothing like living in a household of best friends.
Posted by Anne at 8:20 PM