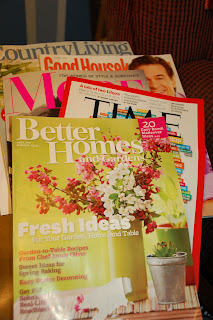 The magazine piles are getting higher. I am ashamed to say that there's more than just one pile of magazines in my house. There is one on the end table near the couch in the family room, one near the recliner, and one on the floor near my bed. I do love magazines. They allow me to be quickly exposed to a variety of ideas on cooking, decorating, home organization, fashion, and parenting. Other magazines introduce me to inspiring people, exotic places, or creative hobbies. Some offer me a new perspective on a modern day issue. Seeing towering stacks magazines in my house isn't a good sign.

Last year I canceled my newspaper subscription. I didn't make a clean break, instead opting for the "Sunday paper only" option. But those too began to pile up and I knew it was time to call it quits. I felt so guilty. I almost called my brother Kevin to apologize. No, Kevin doesn't work for the newspaper. But years ago when I was a teen, he'd scold me for being completely disinterested in current events. A common occurrence at the dinner table was for my big brother to quiz me over what I did and did not know about the world. He found the game quite entertaining I do believe. I became a master of eye rolls. I always admired how in tune he was with the world, but he'd worked at it. I recall my parents saying he'd been reading the newspaper each day since he was a little boy. It showed.

He made his point back then and I took it to heart, even if I did not let on to him about that. I would never beat him in a trivia contest, however I eventually got my head out of the sand and started reading the newspaper. At one point I was even reading two newspapers a day. But alas, I could not make it work.

I did start following the news online and I watch the morning report and hear the radio updates, but it isn't the same. I miss reading the daily newspaper. And now my disappointment has grown. I've also abandoned magazines lately. This I will not stand for.

Piles of magazines say only one thing to me: "You're not taking time for yourself". In the summer it is easy. Piles of magazines accompany me to the dock at camp or to the back deck where I sit in the sun. In the fall I carry to bed magazines with articles about the holidays and I fall asleep just as one falls to the floor when my eyes close. In the winter however, the neglect begins. Instead of taking time to sit and read, my weary self tries to do too much.

I do continue to read books, even if they are titles for work, but those poor periodicals! They keep getting tossed to the heap. I will not let anyone throw them into the recycling bin. I am determined to make my way to them, hopefully before summer. Otherwise I'll need a U-Haul to carry them out to the dock come August.
Posted by Anne at 7:07 PM