By the Grace of God 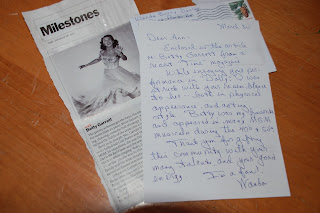 God works in mysterious ways. At the end of a very difficult week, He not only gave me time to sleep in with an April Fool's Day snow storm which canceled school today, but yesterday He also dropped a meaningful letter in my lap.

It was actually the second special handwritten note in two weeks that had been found in my mailbox. The first was a beautiful thank you letter sent to me by a daughter of Pauline, my Mom's best friend whose funeral I had sung at in early March. The letter touched me deeply. It was a thank you note that stirs you to want to write a thank you note in response.

Yesterday I received another letter. This one was sent to me from Wanda Dunlap, a woman I'd first met back in 1997 when I acted alongside her husband in the musical Oklahoma. A few years later her husband and I again did a show together. Playing the character of Bill Sykes in Oliver, he'd actually killed my character Nancy! Wanda was always so complimentary of my stage work and after hearing from others of how she had been a sensational actress years ago when she had been active in community theater herself, I was always very humbled by her praise.

Wanda's husband Bill died last year, shortly before I performed as Dolly Levi in the musical Hello Dolly. Wanda, who had once played Dolly when she was younger, came to the performance. I remember her stopping to talk to me after the show and mentioning an old actress named Betty Garrett. I did not know who this actress was, but Wanda said to me then that I had reminded her of the woman who had been her favorite actress in the 1940s and 1950s.

Last Sunday, as we left our car in the grocery store parking lot, Wanda pulled in next to us, rolled down her window and said, "I'm going to send something to you. It's an obituary and...." I know I heard her words at the time but they did not really sink in. I think I was once again trying to place the name of the actress. But then yesterday I received Wanda's note.

Dear Ann-
Enclosed is the article re: Betty Garrett from a recent "Time" magazine. While enjoying your performance in "Dolly", I was struck with your resemblance to her--both in physical appearance, and acting style. Betty was my favorite and appeared in many MGM musicals during the 40s and 50s. Thank you for gifting this community with your many talents and your good energy.
I'm a fan!
Wanda

To be compared to a smart, funny, wonderful, and beautiful classic Hollywood actress such as Betty Garrett is indeed an honor, however the more meaningful tribute was that a woman as amazing as Wanda Dunlap chose to grace me with this letter, one of two special letters received this March, two letters I will treasure for the rest of my life.