I met David when I was in the fourth grade. That was a traumatic year for me or so I thought at the time. Due to a move across town and the town's rule that certain neighborhoods were to attend certain schools, I had to switch elementary schools and leave my close friends behind. I'd had a nice group of friends that I had grown up with and I did not know anyone at my new school. Who knew that moving one mile would make such an impact on one's life?!

At the new school I was teased for having platinum blonde hair and for being advanced in reading and math which meant I needed to attend fifth grade groups. There were some fifth grade girls who threatened me and boys who called me names. I lacked any confidence to make things right for myself at the time. I hated the school and I hated my new house and I yearned to go back to my old school.

To make things worse, the teachers began teaching square dancing to our fourth grade class. I remember thinking, "Oh God. Why this?! Why now?!" The girls lined up against a wall in the gymnasium and the boys chose their partners. I remember hoping against all hope that a boy named Aaron would pick me. But before it was Aaron's chance to pick, a boy named David called out my name. I was pretty disappointed and a little embarrassed too because I wasn't sure whether this kid David was going to make things better or worse for me socially. All I knew was that the following week the boys were going to pick their partners again, so I had another chance to have Aaron call out my name.

The following week arrived and wouldn't you know it?! David picked me again! I was starting to get annoyed. Week after week I was paired with this David kid. My dreams of dancing with Aaron, the cute blonde boy who I thought would relieve me from my torturous fourth grade year, were crushed. 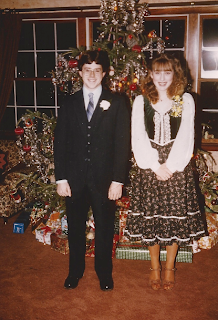 Life has a funny way of working out though. Fifth grade gave me greater confidence and before I knew it, I was in Middle School, back with my old schoolmates and folks from my new school who I'd befriended. When eighth grade rolled around that David kid came back into my life. Seems he liked me and I actually started to like him too. He was funny and I loved talking to him. We talked on the phone every night and before long, we were a couple. We even had our own special song. I fell in love...for the first time. I dreamed of us having a future together. Sure I was only 14 years old but it seemed really serious and special at the time. Yet, incredibly innocent, shy and new to this whole "boyfriend-girlfriend" thing, I was more comfortable with him on the phone than I was in person. Still, I grew to care for him an awful lot. We spent much of our eighth grade year together and the first four months of our freshman year of high school together before we broke up. What had seemed serious and special went out the window, I am afraid, when I met this older guy, a senior named Eric. 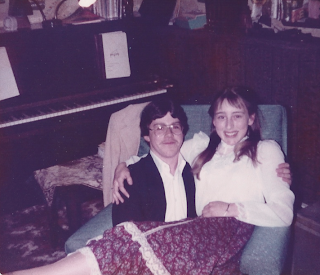 I sometimes think about the purpose of my first boyfriend David. We were young and that innocent sweet time of love in our eighth and ninth grade years could easily be dismissed as Puppy Love, a phrase that I do recall David detesting. But David has a special spot reserved in my heart. He was the boy who chose me as his fourth grade square dancing partner, saving me from potential embarrassment of being chosen last, and the boy who first said, "I love you" to me. He was the first to hold my hand, giving me butterflies in my tummy, and the first to make me feel beautiful when I'd always felt like the ugly duckling. He also was the first boy to show me that I had better be careful with those I choose to let go, with whose hearts I might break.

After I'd been dating Eric for awhile, I broke up with him. We went our separate ways for a little while, but we found our way back to one another before too long. I almost let him go several times actually. But something always made me stop to get him back. I realized that despite the fact that I had had only a few boyfriends in my teen years, I had something incredibly real in my relationship with Eric. Nothing could be worth putting that at risk. It's pretty easy to say that Eric was incredibly patient with me, a girl three years younger than he, a girl who was still pretty young and who needed time to grow up. Eric was never mean to me, never called me names or said bitter things to me when we broke up. He was forever a gentleman and he always treated me right. He showed me that being in love with someone means you can set them free and as the old cliched saying goes, "If it is meant to be, it will come back to you". 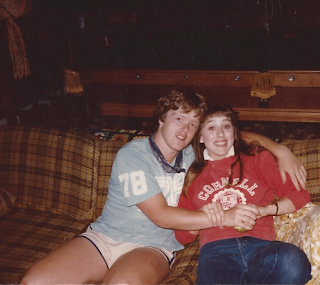 I hear David's doing very well, happily married with a family of his own now. That makes me smile. Letting David go was a heartbreak for us both at the time, but I believe having him as my very first boyfriend was meant to be. Letting go of Eric a few times years and years ago, only to realize that he was someone I could never let go was also meant to be. It's funny how life just has a way of working out for us all in the end.
Posted by Anne at 6:32 PM