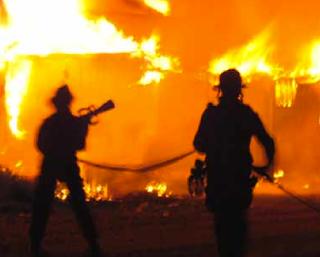 This year, reading with my students, Ray Bradbury's dystopian novel, Fahrenheit 451, has had me thinking a lot lately about several topics--books and literacy, happiness and sacrifice. The story revolves around a firefighter who begins to question his role as a man who starts fires more often than he puts them out. The images and the discussions around Montag's discovery of his place in the world are rich, however the book connects with me in several different ways. Those who know me very well know that I have been afraid of fire since I was a little girl. When I was just a few years old, the house across the street from ours went up in flames. The home owners came into our house while the fire department worked to extinguish the fire. My memory revolves around the homeowners' panic and grief. I remember them crying and my parents trying to comfort them. It was terrifying to me, a small child eavesdropping and spying from the stairwell. In my mind I have even created the memory of seeing the house in flames but I am not sure I actually did.

After the fire, I remember planning my escape from my bedroom if I should ever wake up to find my own house on fire. I made sure I knew how to open the tricky screen windows and I realized I could easily walk along the roof line to the backyard where the roof dropped down low enough for me to jump from. Later when I moved across town to a different house, I again planned my escape route and felt better when I saw that a fire box was right at the end of my driveway.

When I first moved to college I dreaded middle of the night fire drills. In fact, I was incredibly frightened of them. I lived on campus for two years and was subjected to only a couple instances when either an alarm was pulled or when smoke indeed set one off during the evening hours, but it was a rare night that I'd go to bed without thinking of the possibility of being awoken to the fire alarm. I remember making sure my sneakers were within reach and more importantly, that my glasses could be found quickly should the disorientation of a rude awakening occur.

As an adult in my own home, I am cautious but I have relaxed in terms of my fear. I do not live in fear however my family would probably quickly report that I do indeed have a fire ladder under my bed in case I ever needed to drop it out the window, and I make doubly sure that any fire in the fireplace or in the outside fire pit is completely extinguished before I go to bed. But I have calmed myself over the years. I think the biggest thing is that I realized a basic truth about myself close to 20 years ago. I realized that no matter what happened during the night, I was only going to be able to focus on one thing, getting my children to safety. I no longer think of my own safety when danger is near. Instead my thoughts immediately go to my children, and I know that I would risk anything to keep them safe. It's that simple.

There is absolutely no doubt in my mind that should I ever, God forbid, awaken to a fire in my home I would save my children or I'd die trying. It's not even up for debate and most parents will know what I am saying. Suddenly when you are responsible for another life or lives, especially of loved ones, you lose the fear for yourself and you realize that there's a job to do and you cannot let fear interfere in any way.

The girl who was frightened years ago by the sight of a family struck by tragedy has grown into a fierce protector of her children. When you have a job to do, there's little time for the indulgence of fear. You simply need to extinguish the threats and assess the situation. Fire drill or no fire drill, I am forever prepared to face fear...even my fear of fire. I have learned to fight fire with fire.
Posted by Anne at 11:30 PM