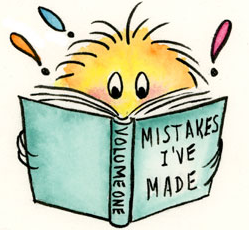 We all have our embarrassing moments. I have surely had enough in my lifetime but some memories fade over time while others remain. My daughters for instance will not easily let me forget the time that I said, "Squeeze me" instead of "Excuse me" as I was trying to avoid bumping into some young gentlemen as we left McDonald's one time. Oh my! Did I actually hear those words coming out of my mouth?! Syd and Emma who witnessed this can always get me laughing by reminding me of this silly but embarrassing slip of the tongue.

This morning at church I also fumbled by saying the wrong word in prayer. Emma heard me and I realized my mistake too and we both got the giggles. I was afraid I was not going to be able to keep my composure at the microphone to announce the next hymn, but luckily I managed to pull it together.

However, there are a few times in my past when giggling over an embarrassing moment did not happen. That's because the embarrassment humiliated me at the time. Although years have gone by and I have those moments in the proper perspective now, they still serve as serious reminders to me that I have needed others to open my eyes to things about myself that I could not see before.

One such time occurred when I was a new teacher. A group of us were chosen to go on a retreat to formulate a new program for freshmen students. However we were encouraged to get to know one another better before making academic decisions, so we did some team-building exercises and took time to discuss our philosophies with one another. I was paired up with Steve for one activity and we were asked to talk to one another for two minutes and to then report out on what the other had said.

I reported out first. I remember being very nervous, as at the age of 25 I was still terribly intimidated by Steve who I thought very highly of. But I got through it and waited anxiously to hear how Steve was going to report out on me. He then spoke. "What do you do when someone thinks they were listening to you but they really were not?" he asked.

Ouch. If there had been a hole for me to drop myself into at that moment, I would have. I had been called out. I'd been so busy worrying what my next words would be to Steve or to the assembly of teachers that I had not truly listened to Steve very well at all. He was right. I was a terrible listener. From that moment on, I vowed to change. When I think of how far I have come in the past 18 years, I have only Steve to thank. I still have to work at being a good listener as my mind goes to so many different places but I make a conscious decision in every discussion to be fully engaged and present.

To be given a wake up call by another is never easy. It can be embarrassing or humiliating to be called out, to be held accountable. Some of our faults may be comical as when there is a slip of the tongue, but other imperfections will surface within us as is only normal, and we'll need the honesty and the boldness of another to help us recognize that a change is needed. Steve, by the way, became a dear beloved colleague of mine. His retirement this year is well deserved but I am so going to miss him. I will carry him and the life lessons he's taught me, through his words and more importantly his actions, for the rest of my career and beyond.

I realize that our missteps are a part of life and they help shape who and what we become in the future. Making mistakes cannot be avoided and there will be times when corrected mistakes may resurface, but having our eyes opened and being given help from those who sometimes see us better than we see ourselves, so as to do our best not to repeat the error of our ways, is my hope for myself and others.
Posted by Anne at 4:12 PM