An Evening with Jeanna and David Sedaris 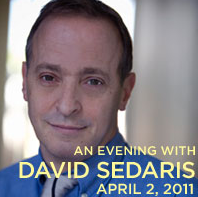 My friend Jeanna and I went to see David Sedaris tonight. I had no idea who this man was until a few years ago when, quite by chance, I came across an essay he'd written that had made me laugh right out loud. It was an essay discussing gender through the presentation of foreign languages which assign words a female or male variation. I'd quickly brought the essay to Jeanna's attention as she is a French teacher and she too found it hysterical.

So when I read that the author was coming to town, I decided to surprise Jeanna by buying us tickets. I presented her with the idea on her birthday back in December and she quickly accepted under the condition that she be allowed to buy my ticket for my birthday in March. The show, scheduled for April 2nd, was highly anticipated by the two of us and as the date drew near, we made additional plans to go shopping and out to dinner together before the 8pm performance.

Over dinner I told Jeanna that I would be under the gun to write tonight's blog post as I knew I'd get home after 11pm. I told her she'd have to help me find inspiration for my writing and she quickly said, "Hello. David Sedaris will give you inspiration". I'd thought of that of course but I did not want to put any pressure on him.

But inspire me he did. He easily launched into humorous stories from his past such as his learning of different languages by studying on his plane rides and of how the phrases he'd be taught did not always work out for his situations. He wryly recounted the years of listening to his father speak highly and passionately about a fellow swimmer of David's, a boy David grew to hate for taking all of his Dad's attention, and of how even as a New York Times Bestselling Author, he could never quite get his Dad's spoken admiration. He spoke comically of being chased by a disabled Chinese man and he took time to read from his diary entries kept over the years of his book tours. Mr. Sedaris shared jokes he'd picked up from fans of his who stood in line waiting for him to sign a copy of his book, and he then discussed a writer he admires, Tobias Wolff. That's when I found tonight's inspiration.

You see, Mr. Sedaris spoke strongly of his admiration for Mr. Wolff's writing. He shared some of it with the audience tonight and then said how he knew that although he could try to play around with the syntax of Mr. Wolff or the way in which he used point of view, that he could never write quite like his role model. He stressed saying that despite how different the two men are--one Jewish and gay, one Catholic with a family, that he still could read something of Tobias Wolff's writing and be deeply affected by it, time after time. He spoke of reading and underlining a passage in one of his books and writing in the margins, "This is SO true" and being comforted by that shared understanding of experience.

That's when it hit me. I am only beginning to find my voice as a writer. I am only beginning to accept that I too cannot be a writer like anyone else. I have my own stories, my own experiences, and my own way of telling of them. I do not have the flair of some of my beloved writer role models, and yet, I'm beginning to see that this is not necessarily a defeating fault of mine. I can still learn and grow as a writer, surely, but my writing is going to have my own stamp. My writing is going to have my voice.

Mr. David Sedaris has made a successful career out of the telling of his personal experiences. His stories are often mixed with a child's account and an adult's perspective. Some tales reveal the humor he has found within otherwise troubling experiences. And others show his imagination in the exploration of who we are as human beings. I admire his honesty, his insight, and his sense of humor. I also find him to be very brave. And yet, the man is humble. He brings his audience's jokes onto the stage, allowing his fans to share in his spotlight. He ends his show by speaking highly of another writer, even promoting Tobias Wolff's books and selling them in the lobby after the show. He promises to stay and meet with people who want to take time to say to him about his own writing, "This is SO true" as they too have been comforted by what seems to feel like a shared experience.

Jeanna, a fellow teacher and writer, gave me a terrific birthday present. She feels the same way about the present I gave her for her birthday. We had a wonderful time tonight. And Jeanna was right. Tonight's post was indeed inspired by Mr. Sedaris.

I may never have a New York Times Bestselling book of essays like Mr. Tobias Wolff or Mr. David Sedaris, and that's okay. Because I have already pleased the person I most wanted to please by becoming a writer. Me. It's not that I think my writing is fabulous--after all, I post "rough drafts" quickly assembled before midnight each night since I have this crazy but fun daily goal of posting each night--but what has made me happy as a writer is that I have already inspired others to try their hand at writing. I have inspired others to find their own voice, to see their own connections and to explore their own inspirations. And I'm writing. I am WRITING every day. I love that. Yay me !!
Posted by Anne at 11:52 PM