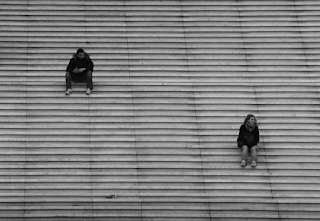 To Whom It May Concern,

I read once that “An inability to stay quiet is one of the conspicuous failings of mankind”. What a shame.

It's time to begin celebrating the quiet ones. You know the type. They go by many names but they are those who let all the others take center stage, do all the talking in the lunch room, suck up most of the oxygen in the room. Well, I'm tired of it. The quiet ones, those with maturity, grace, humility, and unending patience deserve some attention. They won't grab it on their own you see. It's time to tell the big mouths to zip theirs.

Did you notice Nicole today? You probably did not. Let me tell you about her. She has been struggling with depression for awhile now but is making incredible strides. She did a research paper on the subject this month. She was inspired to learn more on the subject of a condition that took years from her older brother. She did not want that to happen to her. She's a beautiful girl, inside and out. Smart, accepting, and kind. She has a sweet smile. I see it when I make faces at her to let her know I see her there, quiet at the side of the room.

Did you notice Mick today? You probably have dismissed him. He has been misunderstood by others many times. Oh, he's no angel but it's a rare day when someone takes the time to put aside what they've heard he's done in his immaturity, and asks him questions about his thoughts on the way the world works. He has strong opinions on addictions. He's watched his entire family struggle from one or another and he's afraid he'll succumb to one himself. He doesn't want that. He's fighting it with everything he's got. The trouble is, he doesn't have too many role models. Hell, he doesn't have too many decent people giving him the time of day. He's searching though, searching for someone to understand his plight. I worry about him. I hope he'll be okay. He does have ambition and a goal he wants to pursue. His eyes light up with hope when he speaks of what he wants for himself.

Did you notice Aidan today? He comes across poorly to others. He appears never to listen but trust me, he is paying attention. He's grown and matured since last year. He still turns red if you try too hard to get him to talk in class; he'll opt to fail that presentation he's got ready to present unless you are gentle and coax him to share "just a few slides". He's self aware though, more than you realize. He hates Duane because that guy is "loud" and "talks too much", but he will also readily admit to your face that he himself was "a douche bag" last year and he'll all but beg for your forgiveness over that.

Did you notice Chad today? He was the boy none of his peers knew for a few months. He was just "that kid" at the front of the room, the one who grabbed the closest seat to the teacher but who never turned around when his peers were talking behind him. He was the "new kid", the one who struggled with every reading, writing, and research assignment until one day he was invited in to revise his work with the teacher's help. Then he started smiling. The day he got up in front of his peers and did his presentation, the day he stuttered repeatedly out of nervousness but then laughed and showed the teacher and his peers it was okay to laugh too was a beautiful day. His peers knew he was "different" but they began to love him for who he is and what he does.

Did you notice Rhonda, Kate, and Rita today? They are artists and writers but they are humble in spirit and discreet about their talents. They observe the others however and they use what they see and hear to inspire them as they continue to create their art. They are soft spoken but their voices command my attention each time I read their work. What a shame you may never get a chance to listen to them roar.

For Nicole, Mick, Aidan, Chad, and for Rhonda, Kate, and Rita, thank you for reminding me of the importance of taking note of how often it's the quiet ones who have the most to say.
Posted by Anne at 9:46 PM