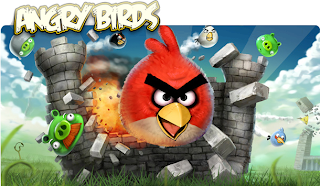 Have you heard of Angry Birds? The computer video game, made popular for its comical challenge of shooting birds from a slingshot at annoying pigs protected by various barriers has been taking the world by storm. I first heard of the game when my son suggested I purchase it for my new laptop computer. Priced rather inexpensively, I bought the game.

I have never been one to get hooked on video games. I do remember enjoying a game of Tetris once in awhile when we first bought a Nintendo and then there were some Hoyle casino games that I found fun to play on our first IMac computer. For while there was also a tile matching game that had me competing for higher scores. I enjoy playing the Wii every once in awhile but I become bored quite easily and would much rather browse though a magazine or read a book. still, playing Angry Birds once in while has had its appeal.

I tend to turn to the game when I have a few minutes of time to kill before going to pick up one of my children. I attempt to progress through a few levels before I have to leave. Often however I reach a point (usually only a few minutes into playing the game) when I think, "What the heck am I doing?! This is pretty stupid. Am I seriously wasting time on this?!" However at other times, playing the game is a nice distraction when I am struggling a bit with Writers Block. It does not happen too often but every once in awhile I cannot think of what I want to say in the middle of a story or when I'm brainstorming ideas for a blog post. 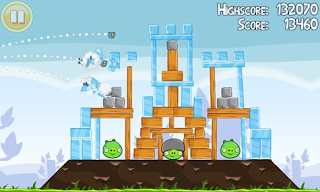 Tonight as I looked at the clock and saw that I did not have much time before midnight to post my daily discussion, I saw the little Angry Birds icon at the dock on my laptop. I did not click it to begin playing but I did think of the game and of the challenge of blowing up the little green pigs who sneer and chuckle at you when you fail to crush them in a level. I've got to say that there is something strangely satisfying about aiming wingless birds at wood, stone, or ice beams in an attempt to crush all the chuckling pigs. I am not sure I understand why I continue to play it, but what can I say? I do. Heck, tonight it even inspired me to write.

I still do not know why the game is as intensely popular as it is but hey, who am I to judge? I suppose if flinging wingless birds at little green pigs makes people happy or allows them time to be distracted from their concerns, then more power to the silly game!
Posted by Anne at 11:39 PM