After having her for just 10 days, my son, daughter, and I brought our 9 week old puppy Ziva to a free puppy class sponsored by our vet's office. We had not participated in any training with our previous dog who proved to be a loving but nervous dog who might have benefited from early socialization. Despite being a good family dog, (Charlie, our 16 year old dog died just four months ago), we figured it might be good for our new pup to learn to befriend other dogs and to become more relaxed in other people's company. 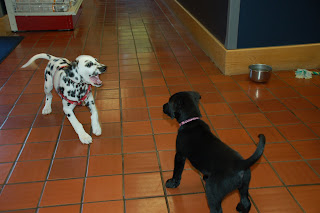 At puppy class, there were just four dogs. One was attending her second round of puppy classes, having "flunked" her first four classes. She remained nervous, preferring her owner's lap. Another puppy hid under the bench near her master's feet and shivered every time another pup came by. But then there was Diesel, a 13 week old dalmation, the new town fire dog. Appearing to be straight from a Puppy Chow commercial, handsome and solidly built, the dalmation was a bundle of energy. He immediately started to pounce, inviting our Ziva to play, however Diesel was rough and tough and much larger than our little girl. Ziva began to cower and ran away. "Stand your ground Ziva", the vet encouraged, but Ziva tried instead to make friends with the two smaller shy dogs, who unfortunately were scared and wanted nothing to do with her. 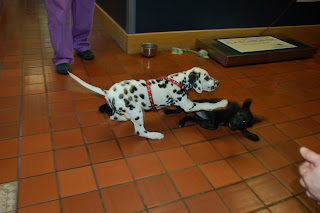 After a few pushes and a tackle from Diesel, Ziva decided she was not going to take any more grief from that zany dalmation. She began to growl and then began to bark and bite back. She went after the toys the dalmation went for too, and started to pounce herself. That's when the two became friends. 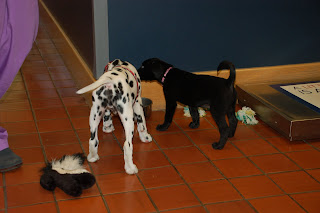 After a little butt sniffing and a shared drink at the water bowl, Diesel and Ziva began playing tug of war with toys and barking playfully at one another. She had proven herself to be a formidable opponent and went to the head of the class. "Yay Ziva! You're getting the hang of this now", the vet praised her. Like proud parents, we couldn't stop smiling. Diesel, seeing how Ziva was now sticking up for herself, began to tone down his behavior. He learned that in order to have her as a friend, he'd need to be a bit more gentle with her. Ziva learned that she had to learn to trust her own instincts so she could have a little fun and meet a new friend.

By the end of the hour, Ziva was exhausted. So were we. We'd spent almost an entire hour laughing and smiling. Ziva came home, ate her dinner, and immediately went to sleep. 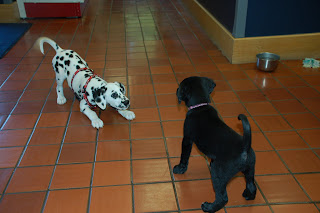 Reflecting on what was a most enjoyable outing, I am thinking of how much Ziva and I have in common. Like Ziva, I am cautious and not overly thrilled with those "big dogs" who come on too strong. But like Ziva, I quickly learn the importance of putting such people in their place. I don't always need to bite; a simple growl or standing my ground will do. And in doing so, those dogs learn to tone it down; they learn that if we're going to be friends, they'll need to respect who I am and then we can get to know one another better. (Of course, I'm also sure that in the presence of those more shy than myself, I appear to be the threat. It's important for me to respect those folks too). Finally, being cautious is smart, however much can be lost if one does not take chances with other people. Sure, there's always the likelihood that taking those chances may lead to getting hurt at times, but without taking a few risks, life is safer but awfully dull. Despite the risk of being pushed, bit, or even tackled, it's important to pounce at those chances for greater happiness and joy.

After just four months of losing our Charlie, I suppose that's why we got Ziva in the first place. We took another chance at happiness. I'm looking forward to next week's puppy class and to the joys and life lessons my precious pup will share with us all in the years to come.
Posted by Anne at 10:19 PM