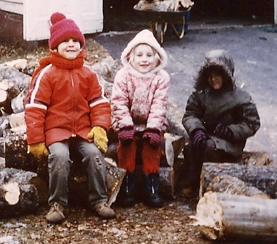 Two of my closest friends when I was a little girl were Peter and Dougie. Boys from the neighborhood, we played outside together, alternating between my yard and Peter's. I was not allowed to go to Dougie's house because it was around the corner, out of view from my Mom's watchful eye, and at a curve where the speed of cars frightened her. It was natural for me to hang out with the boys; we'd ride our bikes or play hide-n-seek. I once got grounded for daring to bike over to Dougie's house even; the thrill of being one of the boys and taking the risk cost me two weeks without my bike.

As I got older, I continued to have several friends who were boys (as opposed to boyfriends, although yes, I had my share of those too). In fact, by the time I entered Middle School, most of my best buddies were guys. Scott, Andrew, David, Bruce, Paul, another Bruce, and another David, made up my circle of close friends in those awkward preteen years. It's not that I did not have friends who were girls, I did, but well, I always seemed to find it a truly natural and fun time when I was with the guys. High School complicated matters a little. I tended to be quite fickle, a word I used to HATE hearing in description of myself. Still, although I would develop crushes on many of those boy friends, I continued to truly appreciate the boys' humor and our platonic talks.

When I became an adult, those friendships with males continued. First, I hung out with my boyfriend (now husband of 22 years) and his college guy friends. Times with Scott W and Dave M were hilarious. Later, spending lunches and enduring boring staff meetings with my husband and our fellow male coworkers, especially Pete S, Steve B, Rob M, Dave J, Lowell, Doug K was always fun. Being one of the few women who perhaps dared to "give it back to them", I found the times with the guys were sure to challenge and entertain me.

I've often contemplated what it is about guys that I like so much?! Women are wonderful creatures; I know this to be true yet, like their Mom, my daughters each have several good friends of the opposite sex also, and we've talked about the enjoyment of having a strong network of male friends. We sometimes wonder if it's simply that innate feeling of protection we like, or is it that we're all harmless flirts by nature? Is it that we like the straightforwardness of our male friends, the lack of drama? Or maybe it's that we've always enjoyed our own brothers--their silliness and foolish behavior--and we want more of them? Although to this day we are all often up for a game of ball or games of hide-n-seek played outside in the woods, none of us were ever true tomboys, although we were never exactly feeble girls either; we just like hanging with boys. They're an awful lot of fun.

I am grateful to all the boys who accepted me as a friend in my childhood, teen years, and into adulthood. I'm especially grateful to a guy named Eric who made me his best friend for life.
Posted by Anne at 7:49 PM