You call upon God.

Where is your God?

It wasn't until I moved away from my hometown that I heard of atheism as being anything other than a condition that the most troubled people suffered from. I knew that being seen as being "too religious" could be tricky with people, and as a new public school teacher, I was well aware of the separation of church and state as it might play out in a classroom, but it's pretty safe to say that I did not give a whole lot of serious thought to how my own beliefs compared to others' until further into my adult life.

I then became good friends with an atheist. He challenged me and I challenged him. He was a good six or seven years older than me so I could not quickly pass off his ideas as immature, and unlike what I'd naively thought of atheists in my early years, my friend was intelligent, generous, understanding, and an all around "good guy". For awhile I considered it a goal of mine to make him rethink his beliefs (or non beliefs). I asked him lots of questions. He returned my questions with his own. I tried to let that difference between us fade to the back burner but it was tough for me to do that. Despite my tenacity, he was patient with me.

However, long after he and I parted, a result of a job change, I became acutely aware of others like him, young people, old people, all good people who did not believe in a higher power. I found myself giving the matter a lot of thought. Correction. I still give the matter a lot of thought. I think about atheism so often in fact, being exposed what seems to be a higher and higher percentage of non-believers in my life, that I sometimes question my own beliefs. And then that scares me greatly. 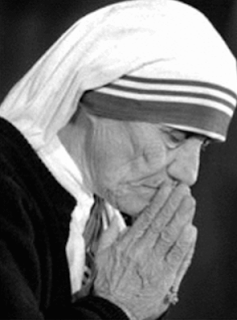 However, when I frighten myself, I think of reports on Mother Teresa of Calcutta who was said to have revealed in personal letters the fact that she was tormented by doubts about her faith. One of her dying wishes was to have the letters destroyed. However I consider it a blessing (and yes, even perhaps an act of divine intervention) that they were revealed to the world. Her own crisis of faith serves as a ministry to anyone who might experience the same. To know that there can be darkness or doubt that brings any mortal to question their faith, even one as revered as Mother Teresa, shows us that no one is immune to doubts and fears, and I believe that is simply part of being human. Perhaps we doubters become strengthened in our faith after such trials of wavering commitment. I have to believe that those atheists have their occasional doubts too. 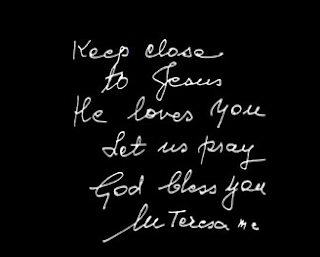 This discussion comes to no quaint conclusion. I can only stop for now saying that I hope God is happy with the strides I've made in my faith over my lifetime. I have a long way to go I know, but I'd like to think that, apart from what I may do publicly--going to church, singing in the choir, occasionally speaking out on matters of faith--He is aware of my quiet prayers and of the subtle ways I work to serve Him. I pray that others, those with faith and those without, will strengthen my own in the years to follow.
Posted by Anne at 6:31 PM