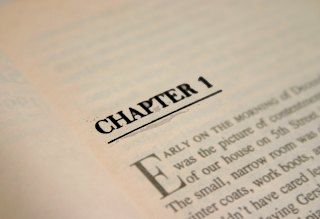 Several years ago, I began writing a novel. I only wrote one chapter but I was hooked on the premise. I'd never attempted to write a novel before, although I do remember a particular short story I wrote back in college as having potential to become a longer piece. Even before declaring myself an English major, I'd taken a creative writing course and then a fiction writing class and had written poetry, memoirs, character sketches, and even a play, but the idea of what it would be like to write a novel had never been explored.

So, a few years ago when I joined a summer writing project internship, I got serious. I developed a second chapter and then outlined a third chapter, and each day as I drove home along the beautiful landscape of my old college town, I thought of my characters and of the different directions my plot could go. It was fun, creating the narrator and deciding what her fate might be. However, the summer course ended and my novel's chapters went into the dark for awhile.

Then last year, while taking time to write with my own creative writing class, I began having new ideas for my book. I had read a novel that inspired me to think of my characters' interactions in a whole new way. I talked over some of my ideas with my teenage students who sounded genuinely intrigued. Still, although I took time to write down my developing ideas, I did not take time to write another chapter.

Back in December, I challenged my first semester creative writing students to take on a project, a practice, or a plan which would push them to achieve something they could be proud of as the course came to an end. I gave them a few ideas such as writing a page of writing every day or to create a photoessay. I even told them about a web site's challenge to write a novel in 30 days. What I never imagined however was that one of my students would take the challenge so seriously that he'd indeed write a novel in a month's time. He presented me with the 120 page book during finals' week back in January. But then, after graduating in early June, Ben brought to me a gift. He had self-published his novel and had several copies printed to give out to his close friends and family at his graduation party. His mother and his girlfriend had helped him with the book's editing process and he'd kept this a secret from me until it was time for him to leave our school. Receiving that book, written and published by Ben touched me deeply.

It may not seem like a huge goal, but this summer I am determined to write two more chapters in my novel. If I could do more than that, fabulous, but I am not going to pressure myself. The ideas presented in my novel's first chapter took root five years ago yet this summer, my novel's characters are again running around in my head. I am once more creating possible scenarios for each of them and it is exciting to be directing their futures.

At my summer writing project, I heard the phrase, "You ARE a writer", several times. It was the first time in my life that I ever truly felt my writing voice was worth listening to, worth sharing. I've since repeated that phrase to my creative writing students, for I have come to believe that we all have a voice that is worth listening to, that we all can be writers if we dare to work at our craft and if we write from an authentic place.

As wonderful as it is to be directing the futures of my novel's characters, I am in no hurry to finish my book. I know that I feel this way because it is simply thrilling to be on the journey I am, exploring writing something new. And if the writing of my novel helps me better teach the joy of writing to my teens, well, that is more important than the final destination of completing my own novel's final chapter.
Posted by Anne at 11:59 PM