After a full day at work today I drove the 20 miles home to pick up my daughter for a dentist appointment. Forever loyal patients, my husband and I have remained with the dentist we first visited back in our college days. The only unfortunate thing is that his office is now a good 40 miles from our home. So Emma and I hopped in the van for the familiar trip to my college town.

As we entered town, we passed the gray painted apartment house where Eric and I first lived after we were married 22 years ago. My children are used to our pointing to the place and I always take a look to see what has changed to the building's exterior. I smile as I remember the various neighbors we shared the building with. Big enough for five apartments, there was the couple that loved to bowl who lived in the attic apartment and the opera student who lived next door. On the first floor lived a series of tenants, most of whom had children. I never did get to know them for they never seemed to stay for long. And finally there was Leo, an older man who had lived in the building for many years. He owned the corner gas station, a curious place decorated in Irish green and clover. Leo was a quiet neighbor unless you made the mistake of parking in his spot. I learned my lesson on squatter's rights very quickly.

Our apartment was nice as first apartments go. It had wooden floors throughout with the exception of the kitchen and bath. The rooms had big windows and charming built-ins including a lovely curio cabinet/bookshelf with drawers. The apartment was very sunny and sported a good size living room, two bedrooms, large kitchen, and den/office. It had a covered back deck and a pretty central staircase leading to the front door. We lived on the second floor of the building. The apartment had its peculiar features too however, including the fact that we had to deal with an apartment sized fridge and a bathtub that lacked a shower! (How we ever survived taking baths for three years is beyond me). There were hardly any closets so we used one of the bedrooms for storage but did put in a rollaway bed for guests. The apartment was what we called “a bowling alley”. The long hallway between the living room and the kitchen was shaped like an old fashioned shuffle board court and it was pretty common for me to take a running start and to slide from one room to another in my stocking feet. In the den/office we put an old sleeper sofa thereby ensuring that company would have enough room to spend a few nights with us on occasion which they did.

An older building though, we'd lay in bed in the apartment and listen to the sound of little critters running through the walls. We'd sometimes hear September (the opera singer) practicing her music and we'd occasionally hear the various families that lived downstairs come in or leave with their children in tow. At times I'd also hear a vacuum being used upstairs but overall, it was a quiet place to live.

It wasn't much but it was our first home as man and wife. In the home we created an oasis and hosted many friends and family. It seems strange at times that our children have only seen the outside but of course it was never their home. Well, with one exception. Sydney was born on a Tuesday and came home from the hospital on a Thursday. We spent five days in the apartment with her before we closed on our current home the following Tuesday. Take it from me however. Being a first year teacher, having your first baby, building your first house, and moving in when your newborn baby is just one week old makes for one CRAZY time! (But it was awfully exciting!) 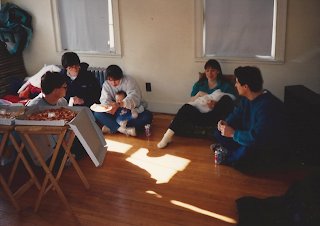 One of my favorite memories of the apartment occurred on the Saturday before we moved out. A new mother who had just come home from the hospital two days earlier, we welcomed a number of family members and friends who traveled down to help us move into our new home. We had special permission to put our things in the new house but we had to promise we would not sleep in the house until the official closing. The “moving crew” helped us pack boxes and lifted furniture into various vehicles to travel the 40 miles to our new town. I ordered pizzas and sat on the couch cushions as everyone worked around me. One by one they'd come to sit with me, to check out the baby. We talked about how I'd be sleeping on an air mattress for a few days until we could move into our new home and they shook their heads and commented on how a new Mom shouldn't be doing that. But I did not care. I did not know any better. I was tired and sore and emotional but I was happy. A new chapter in our life had begun.

As we passed the familiar apartment building today, Emma, my middle child, looked around the neighborhood and as we reached the intersection to head to the dentist's office she commented, “This is a pretty road”. It was a simple but sweet observation said without any prompting and again I found myself smiling. “Yes, that is a pretty little road”, I agreed. I suppose that any road that leads me from one chapter of my life to another is going to be especially pretty.
Posted by Anne at 7:31 PM