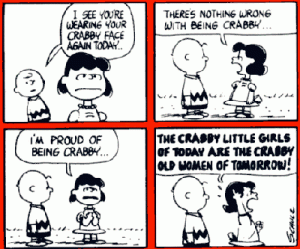 I miss the days when I was told to go to my room to take a nap when I got crabby. Okay..although that makes for a good hook, in all actuality, I don't remember that ever happening (the being sent to my room part, not the crabby part). As a child I would get snappy with my older brother but when you're the baby sister in a family of five children, and your siblings are a lot older and therefore wiser than you, parents tend to look the other way thinking correctly that you're simply doing what you can to defend yourself. I always fought back with the only weapon I truly had...my caustic tongue. The defense continued to work in other situations as I got older. But then I was educated on the nuances of my acerbic wit.

Years ago, a particular person in my life (No, not my husband. He's too nice to be completely honest with me) told me that I reminded him so much of "Deborah", the character played by Patricia Heaton on the comedy series "Everybody Loves Raymond". He said it was my sly use of biting sarcasm that made him say this. I remember being embarrassed by this remark (even though he seriously meant it as a compliment--he told me so) and vowing to "watch my tongue" in all future conversations. However, I came to realize that sarcasm, sometimes called the language of the devil, (seriously?!), did not have to be completely abandoned, rather it could simply be toned down and used less frequently. Well, duh !

The other day when I listed a few of the roles I'd once played in the theater, I forgot one very important character, Charles Schultz's Lucy. I do not know what it means that I neglected to mention this one, for her pure joy at taking away Charlie Brown's football at the last minute and her taunting of Linus and the snatching of her younger brother's security blanket was such fun to play. Part crab, part antagonist. Who doesn't love Lucy!?

For the most part I'm pretty even keeled. I'd even go so far as to call myself sunny and optimistic. (Seriously, I'm not kidding. People have called me inspiring for my positive nature. Don't laugh. I know I've been rather depressing to listen to lately but I'll be back to normal soon. Give me a break). However when I am tired and stressed or otherwise irritated and disappointed, I have all I can do to bite my tongue. I very rarely "yell" (I abhor yellers) but I do admit, I can get snippy. (Don't you just love that word, snippy?!) Often when I am in a foul mood, I tell myself not to talk, not to even respond, not to get myself in hot water with others. I take deep breaths and try to relax. (It helps to have a good friend agree to kick you under the table when she senses your lips are parting to speak). But often, the more I suppress, the more sarcastic I become. What's a girl to do?

And people wonder why I take time to write each day...it's called therapy folks. But okay, okay. I'll tell myself before you tell me. I am going to bed early tonight. Mom and Dad may have been smirking in the front seat as I laid into my older brother, but they also taught me that in polite company, if you don't have anything nice to say...

Oh the heck with that. There are enough of those lemmings in the world already. Bring on the Lucy. Tonight I'm crabby. Nice to meet you. What's your name?!
Posted by Anne at 7:15 PM