Mr. Elliot Burton. He was my fifth grade teacher and he did something incredible for me all those years ago. With the simple use of a shoe box, Mr. Burton introduced "the problem box". He asked us all to submit particular problems we saw or were having and he said that each day the class would brainstorm solutions. The day he addressed my problem, I began seeing the world more clearly.

A few months earlier I'd learned that I would need glasses. I was horrified. I already felt like the Ugly Duckling with my platinum blonde hair that was unlike anyone else's. Poor Dr. Corrigan. I cried when he told me I needed glasses and I was so worked up that I rushed through picking out a pair of attractive frames and went home with some terrible horned-rimmed specs that I quickly stashed in a drawer. I wore my new glasses when my parents were around but on my own, the eye glasses were never on my face.

For some reason I trusted Mr. Burton's shoebox and so I wrote an anonymous note about not wanting to wear my glasses and I dropped it in the box. Later that week our class was told of a "classmate" who did not dare wear her glasses to school in fear of being teased. Mr. Burton led the class in a discussion about differences and at recess he quietly asked me if I'd try wearing the new glasses for just 15 minutes the next day. I did wear them and before long, they were on my face full time. No one teased me. I'd eventually get better looking frames and contact lenses within just 18 months but I never forgot what my fifth grade teacher did for me.

Times have certainly changed. Wearing glasses is now considered to be pretty fashionable so when my son Paul learned he too would need them in the fifth grade, he took the news in stride. He did ask about getting contacts instead but only out of fear that he'd break his glasses while playing sports. When he learned at the eye doctor's office today that he'd only have to wear his glasses at school to read the board, and that his eye doctor wants him to wait until he's another year older before thinking about contact lenses, he shrugged and easily accepted the news. 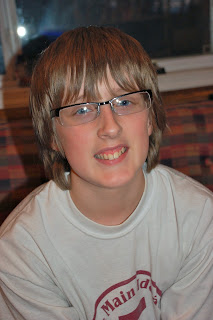 His comment to me as we left the office was, "Taking all those tests was fun"! As he tried on various frames at the optician's shop, posing for his sister and I, and fixing his hair in the mirror, I couldn't help but be grateful that getting glasses was a piece of cake for him. It'd been a terrible experience for me when I was his age but he'd actually seemed to enjoy it! He easily has more confidence than I had at his age. Thank goodness.

Something tells me Dr. Corrigan and Mr. Burton would be pretty proud of me though for raising a boy as secure as Paul. Eye-glasses or no eye-glasses, he's got the healthiest perspective and self-esteem a Mom would ever want her 11 year old child to have. And he looks pretty darn adorable in those new specs too !!
Posted by Anne at 10:27 PM