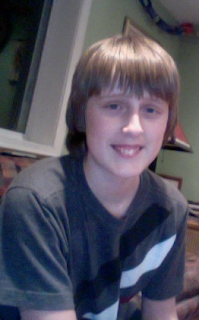 Nearly a decade after having gone through this with our eldest child, there we sat listening to the orthodontist discuss my son's treatment. Four months with a palate expander and 18 months in braces. No need for headgear and if he's good with rubber bands, he won't need the "spring things". After going through the information, the doctor's assistant turned to my son and said, "Are you excited?" Paul did his best not to be rude and he did not give her a weird look I thought the question may have warranted. Instead he smiled a little and said honestly, "NO".

As we jumped in the car for the ride home, Paul's attention was on the cool game room in the orthodontist's office, not the dreary fact that he was about to begin an uncomfortable series of appointments and be dealing with a mouth full of metal. "They had a real arcade game in there and a PS3 and all that costs a lot of money!" He was sincerely impressed. Of course my husband and I did feel the need to explain to him that we're just one of the clients paying nearly $6000 over the next two years to his arcade game owning doctor, but he's worth it of course. (Paul that is...)

We stopped at a diner to eat on the way home. As if to impress upon us both that he's getting older, Paul asked if he could order the chicken parmesan dinner, something not on the children's menu. He placed the order and also polished off our appetizer of onion rings as he chatted away about the things he wants to do during his lifetime. "First, I'll go to Olive Garden. Then when they come around with that cheese grater telling me to stop them when they've grated enough, I won't ever say stop. Then I want to go rollerskating at Walmart, just to see if they'd allow it". Oh yeah. He was on a roll now. My little clown with both parents in attendance to entertain. I was not surprised by his chatter at all. However to see him polish off that entire plate of chicken parmesan with all the ziti and sauce and a side of onion rings plus the garlic bread?! THAT surprised me. My little boy is (gulp) growing into a true pre-teenaged young man.

Suddenly the before and after pictures of my eldest child that they took years back at the orthodontist's sprung to my mind. In just two years' time I'd be seeing the "after" shot of Paul. If all goes well with his treatment, he'll be 13 1/2 years old, nearing the end of his 7th grade year. Will I even recognize my baby boy in that picture?

A part of me wants to be like Paul and answer the question of "Are you excited?" the same way he did, with a resounding "NO!" Can't we keep them little? Between the new glasses, the longer hair, the new lacrosse sport, and his picky fashion sense, he's grown up so quickly in the past few years; I fear I am unable to record these memories fast enough. But then it's all okay. As he finishes the last of his chicken parmesan dinner, he calls his older sister on my cell phone to brag that he doesn't have to wear headgear the way she had to all those years ago, and I hear him giggling. That's when I know for sure, my little boy is forever here to stay as long as he keeps teasing, laughing, and smiling that beautiful smile, crooked or straightened, for the rest of my days.
Posted by Anne at 9:57 PM