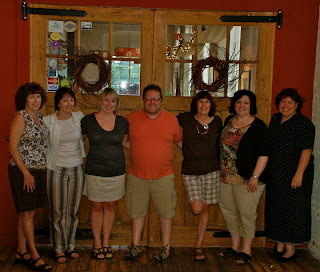 Tonight Eric and I drove to Brunswick to meet some old friends. The friends are five girls, well, women, who graduated from high school with Eric back in 1983. The five women have been meeting each summer for several years when one of the five, who lives several states away, returns "home". Last year, Eric and I were invited to join them. We'd had such a good time that we were delighted to be called back for another mini-reunion this summer too.

I went to school with this group but I was three years behind them, a freshman when they were all seniors. However, they were always so very accepting of me, very sweet and friendly. I always looked up to them. I suppose, even as a grown adult, I still do. They are beautiful, intelligent, fun, funny, talented, and amazingly strong women, each in their own right. I was always touched by how kind they were to me when I first started dating Eric, and even now, 28 years later, it's simply nice to spend time with them, listening to their stories, their memories of their time together in high school.

A few other men who graduated in 1983 were invited to tag along this year but they did not make it. (Maybe their plans changed but in any case, it was their loss). Eric was happy to go again this year. Despite a couple of very full days at amusement parks with our children, he didn't want to miss the gathering! Tonight as everyone gabbed, I took stock of the group. I got thinking of how cool it is that my husband can sit with a table of women for several hours and enjoy the conversation and this simple time with them. He's always been most appreciative of this group of friends and he thinks very highly of these women also. Eric, simply, is honored to know them all.

Eric has always been comfortable in his own skin, never one to wonder what another might think when he's there hanging with six women like he was doing tonight. He was quick to say he'd hoped Patti's husband could have stuck around for dinner with us all, but when he didn't, Eric was content. When you're married to a man who thinks highly of women such as those in this group, you KNOW you've landed a good guy.
Posted by Anne at 11:45 PM