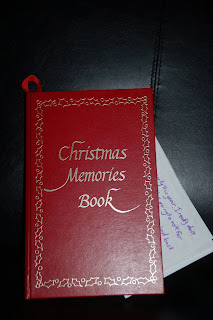 One month after I was married in 1988, I began a Christmas Memories Book. Purchased at a Christmas store, the red leather covered book sat on the table and was the center of conversation when friends and family stopped by. After Christmas I would take time to fill in the spaces describing our visits with family, special presents, food enjoyed, and special celebrations we’d had. The book had room for twenty years’ worth of entries and I remember wondering what I’d do when the twenty years were over. I vowed to get a new book but I’m afraid that did not happen and so, for the past few years I have not kept the memory book going.

Our first four years of Christmas celebrations as a married couple were spent in our hometown where our parents lived. In 1988 I wrote of sneaking out of the house at 4:30am, rolling the car down the driveway so as not to wake my little nephew and niece who were sleeping downstairs. We went to Eric's parents' house and found his brother sleeping under the Christmas tree. We woke up his family, opened presents there, and returned to my parents' house two hours later to do the same with my family. By 2:00pm we were on our way to Boston to catch a flight to the Bahamas for a belated honeymoon!

In 1991 with my first baby due in one month, we visited friends who called my baby “8/9ths” and joked of our need to get back home quickly before the baby arrived. With little money and a long list of people to buy presents for, it was the year I made numerous food baskets which I delivered to family members.

Beginning in 1992, Eric and I stayed home for Christmas. Having purchased our first home in January, a home we moved into when Sydney was just one week old, we were delighted to decorate and to host the festivities. My parents came as did my brother and sister-in-law. My Mom helped me prepare the annual Christmas Eve buffet and the holiday would have been perfect if not for my Mom coming down with the flu. Fearing she would expose the baby, she insisted on staying upstairs in her guest bedroom. She was miserably ill for several days.

The next fifteen years are also chronicled inside my red leather book. There are notes on favorite gifts and descriptions of various things the children said or did, such as when Sydney panicked at the age of four after her Uncle Kevin came in from outside claiming he’d seen a red light up in the sky. She ran upstairs crying until we insisted that she had plenty of time to get on her pajamas and to go to sleep before Santa flew to our rooftop. Times with Eric’s grandparents, various members of my family, and friends who stopped by are forever penned inside my red leather book. Letters from Santa, wish lists, and even a reworked Christmas carol are tucked inside the pages.

If my Christmas Memories Book had a few more pages, enough for this year's entry, I'd be sure to discuss my excitement when Dad called from the rest area outside of our hometown to tell me he and Mom were on their way once more to spend another holiday with us. (In twenty years since they first came to our house in 1992 they have missed only one year). I'd write of my daughters and I singing at Christmas Eve Mass after a day of preparing the foods for our annual buffet and hosting Eric's parents and brother that evening and my brother and his family the next. I'd write of Dad waiting in the stairwell with the three kids while my Mom got ready to come downstairs, and of the funny "Cinderella" book that Sydney and Paul doctored up for Emma's present. I'd write of Paul's excitement over getting his IPod Touch and of making Mom's coffee for her each morning and my retrieving my green fleece robe from the drier so I could wrap it around Dad Christmas morning. I'd share too how Mom and I talked for hours. I'd write of Dad and Joel enjoying the Patriot's game with Eric. I'd write of the bittersweet feelings of knowing I no longer had a child in the house who believed in Santa.

The pages of my red Christmas Memories Book may have run out, but I now realize that, as with everything else, I have evolved with my memory keeping. Photographs and this blog perhaps will help me continue to record memories of the everyday as well as Christmas celebrations. It is my hope however that the first twenty years of Christmas as a married woman will continue to delight and entertain all those who open the cover of my Christmas Memories Book.
Posted by Anne at 6:34 PM