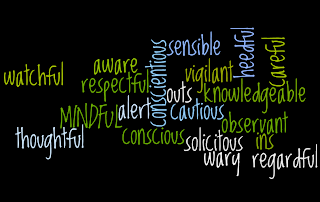 There is a word that is being used repeatedly at my workplace. Its use is irritating me to no end. It’s been gaining momentum for two years now. It was once being used by one man, but I’ve noticed lately that others are using it too. It’s a good word, and I have most likely used the word within this blog, don’t get me wrong, but any word that becomes overused and disengaging to the ear needs to be retired, at least for awhile. And so, I am going to announce my own personal boycott. I will never utter the word “mindful” again.

“We must be mindful of how this will affect the situation”. “Let’s be mindful of our responsibilities”. “We need to work mindfully”. Seriously?! If someone is not acting mindfully by one person’s interpretation, that could be seen as quite an insult. For if a brain is not full, it must be lacking. I don’t think the insults are intentional, however could we please have a little variety?! The word means well, but its users have turned it into a buzz word, a cliche, a feel-good marketing strategy. I’ve become more than numb to the word; I’ve become repulsed by it. I’ve begun counting the number of times it’ll be used in a single meeting and when I find myself growing weary, I toy with the idea of using it in every sentence I utter for the rest of the day as some form of passive aggressive rebellion. But not wanting to perpetuate its use, I refrain.

Let’s face it, this descriptor for using our brain to its fullest capacity isn’t the only way to describe being attentive. With respect to thesaurus.com, we could instead be aware, alert, careful, cautious, conscientious, conscious, or heedful. We could know the ins and outs, be knowledgeable, observant, on one's toes, on the ball, on the job, on to, plugged in, regardful, respectful, sensible, solicitous, thoughtful, tuned in, vigilant, wary, watchful, or have our eyes peeled.

Writer Tom Terez writes, “All of us are guilty of using the occasional buzzword, cliché, slogan or TLA (three-letter acronym, of course). They're harmless in small quantities. It's when they're voiced again and again -- when they define our vocabulary -- that we should worry. That's because buzz-terms are brief and snappy, roll off the tongue easily, and can fool us into thinking that we know what we're talking about.

"It's dangerous when they're used as a substitute for thought," Geiger says. "People sometimes come up with terms to sound like they're in the know -- when in fact they're just parroting a shorthand version of a complex set of ideas. They're not being mindful of what they're saying."

We must continue to work to be aware of our use of these snappy buzz words. If we’re not careful, using them will work as effectively as Orwell’s Newspeak.
Posted by Anne at 1:03 AM