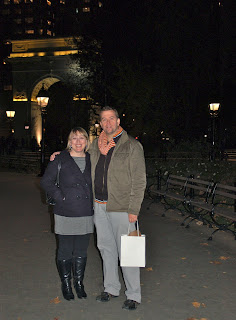 I woke up with the butterflies of a teenage girl. Twenty-five years had passed since I had last seen him. Two years behind me in school, Billy and I had shared a love of music and theater and had been cast together in many shows over the years including Neil Simon's Plaza Suite where we portrayed a middle aged married couple. Having reconnected a few years earlier through Facebook, it had felt good to see where life had taken him. Online we’d shared many memories and laughs. So, knowing we were coming to NYC where Billy now resides, we made quick plans to get together.

Emma and I made our way to Jersey City on the PATH subway. Foolishly getting out one stop too early, we stopped at a couple places to secure directions to Wayne Street where we would take in Billy’s children’s play. We found the theater inside an old white house, the Barrow Mansion. In the hall, I stopped to ask Emma how my hair looked. “Why am I so nervous?” I whispered. Hearing people in the next room, we took a step inside and then I saw him. He turned and I saw those beautiful blue eyes and immediately, I felt at ease.

It was such fun to watch him in his element as he guided in a busload of children and parents. I felt like a proud big sister as Billy stepped to the front of the theater to introduce the show and to explain the afternoon’s program. Emma and I took seats at the back and laughed at the antics of the young crowd. I loved it when Billy, seeing the toddlers getting restless, quickly changed things up suggesting the children join the cast in playing Simon Says, and when he attentively checked in on us while dashing here and there to keep his audience engaged.

After the show we waited for Billy to clean up the stage and chatted with a couple members of his cast. One woman originally from Massachusettes admitted that she had never been to Maine and told us Billy was full of “great stories” and that we’d easily have a good time that afternoon. I somehow already knew this to be true.

Hopping into his silver jeep, we made our way back to NYC and after trying unsuccessfully to park, we decided to park in the theater district and took the subway to explore Soho. After browsing through the luxurious shops, we stopped for a pretzel and a soda. We walked to Washington Park to rest our feet and we listened to a pianist play as we discussed performing arts schools. Then, noting the time, we made our way back. 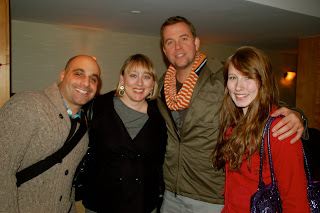 We met Eddie for dinner and were treated to a delicious meal. Emma and I thoroughly enjoyed our time with each of them and our walk to the theater to see Phantom of the Opera was almost as entertaining as the show itself. Eddie was such fun and Emma and I couldn't stop giggling. After the show we stopped for cheesecake before calling it a night.

My favorite memory of the entire day was of something that happened during the middle of Phantom of the Opera. I sat mesmerized by the music and the sets until out of the corner of my eye I spotted Billy looking my way, popping his head around Eddie who was sitting next to me. I looked to the side to catch his glance but by then he was seated back in his chair. Then he did it again. I looked again and missed him once more. I started to laugh. He was checking in on me. So sweet. Yes Billy, I was having a great time. Yes, Billy, I was in awe. But the show, although fantastic, wasn’t the only reason why. Thank you for spending the day with us. Thank you for your generosity and your attentiveness. Thank Eddie for me too. It may have been twenty-five years since we’d last been together but the entire day had proven this to be a perfect reunion. I am in awe of all that...and of how easily those years melted away when I saw your beautiful blue eyes.
Posted by Anne at 7:48 PM