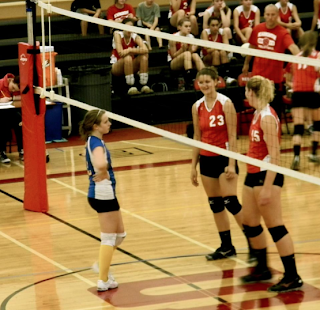 It was to be expected. My daughter’s volleyball team, having only begun two years ago as a club, was playing its first game as a Varsity sport. With only a dozen or so on their team, they squared off against a team three times their size, in numbers and in what also was quickly apparent, HEIGHT.

Driving into the parking lot of the class A school where our class B team would play, we took in the appearance of the beautiful school, its sparkling exterior and interior. Our high school, in comparison and now undergoing remodeling, appears to have been hit by a bomb. Its sad and depressing appearance does little to enhance school pride by any meaning of the words. Still, we as parents stood with pride as our Varsity girls were announced and ran onto the court. We saw the size of the opposing team’s starters and just had to laugh. Clearly we were outmatched.

But what we did not have in height or even experience, we made up for in heart. I watched my daughter smile at the younger players on her team and I heard her yell to them, “Good job!” I remembered her telling me how she was taking it upon herself to boost the team’s good sportsmanship and positivity and I saw the younger girls on the team as well as her fellow juniors and seniors responding. As they lost one game after another in the two sets they played, my girl and her teammates never lost sight in supporting one another. I felt very proud.

As we jumped in the car after the game, I asked my daughter if she wished she could go to a school like the one we’d visited this morning. I was almost serious in suggesting that, if she wanted to, we could look into selling our home and moving to a different school district where the facilities speak school pride and the town’s money provides more opportunities. Emma was quick to answer me, “I’d consider it, Mom, if it were not for my friends. I don’t want to leave my friends”.

Some might think this kind of comment from a 16 year old has everything to do with insecurity in making new friends in a new school district and community. But I know that my girl would be just fine with such a challenge. What some might not realize is the fact that Emma will always fight for the underdog. She will not be easily intimidated nor will she lose focus or direction when the opposition looms large. My girl, my family, has much to do to repair what needs mending in our sad looking school. It’s time we remember our strength and purpose in fighting for the underdog.