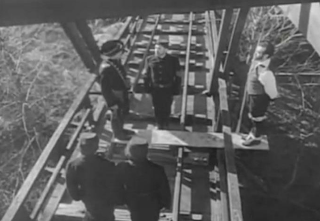 I love many aspects of being a teacher. But one of my favorites is introducing my students to old films they have never seen before. I could say the same of stories, novels, and plays that I bring to their attention, but with some new courses that I teach, including Literature and Film, Horrific Tales, and Dystopian Literature, I have had more opportunities to use films to highlight some pieces of literature that would otherwise be sacrificed for the sake of time in what are now a series of one semester courses. This morning I am showing An Occurrence at Owl Creek Bridge, a 25 minute 1962 French film based on the short story by Ambrose Bierce which was first published in 1891. The film won awards at the Cannes Film Festival and the Academy Awards. I learned recently that it was also once an episode of The Twilight Zone on tv.

The students are not used to seeing black and white film. They are not accustomed to watching films with little to no dialogue, with only sound and a little music provided with the action of the story. For example, when the main character in the story begins to laugh in delight that he is “a living man”, my teens grow a little uncomfortable, begin looking around at one another as if wondering if they can give in to their temptation to laugh too. Those who have read the story for homework know what is coming up in the ending of the film. Those who did not do their homework are shocked at the ending and in their confusion they whisper questions to one another, “What happened?!”

After the film concludes we discuss the film. We review the story, the characters, the shocking ending, and the different tools used by the writer as well as the film production team to bring the story to life. But I first begin our talk by asking them, “What did you think of that?” It’s their reaction to the grainy footage, the twangy guitar plucked song during the “escape”, the tweeting of the birds in the final scene, and the muffled voices of Peyton’s executioners that garner some of the best comments from the class. 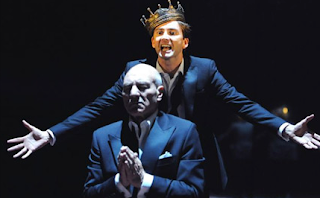 As the semester continues I’ll show more old films and we’ll view modern movies too as we review various story adaptations. Our unit on Hamlet is one of my favorites. As we read Shakespeare’s play, we view a few scenes from various productions. Everyone has their own “favorite Hamlet” and idea of who makes the “best Ophelia”. It’s one of the perks of my job to bring these young people to the movies as if we’re all traveling together to an old fashioned cinema perhaps, as they develop an appreciation for the creative minds of the past and present, those who so artfully interpreted the words of some classic authors. It’s wonderful to have the means to share my appreciation of literature and film with young people. I cannot help but smile.
Posted by Anne at 2:56 PM