This morning I woke up before my alarm went off. Before getting up to dress for Sunday mass, I took a moment to cozy up to my husband who was still sleeping. I kissed him softly and took a deep breath. 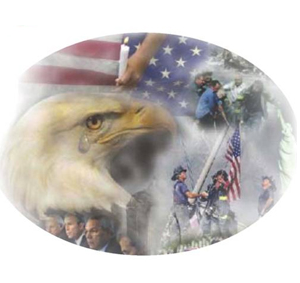 On this ten year anniversary of September 11th 2001, with all of that date's horrific happenings and unimaginable losses, I am overwhelmed in thinking of how to discuss the day here. In my classroom and with family and friends, I’ve joined in the sharing of “Where was I when I first heard the news” stories, and I’ve visited a few websites which have shared the voices of those who suffered personal loss of a loved one who died that day. I’ve listened to politicians and the media discuss the threat of a new attack and yes, despite mixed feelings, I turned on the History Channel today and for an hour, I revisited the videos of the towers collapsing and the faces of the innocent victims and the day's brave heroes.

9-11 taught me how naive I’d been to think that unspeakable cruelty, mass destruction, and such astonishingly wide-spread pain and fear could not happen to the United States of America. As I took my two little girls, ages 9 and 6, onto the living room couch in an attempt to explain to them why their school teachers had been so quiet and sad that day in school, and as I heard my almost 2 year old son playing in the other room, I worried and wondered, “In what kind of world would my husband and I be raising them?”

In the days, weeks, and months that followed September 11, 2001, I found myself unable to read or watch what now seemed to be ridiculous coverage of Hollywood celebrities. I was nauseated by shows like Entertainment Tonight and magazines like People which featured reporters asking actors and actresses frivolous questions. I never looked at celebrity-hood the same way ever again. Those who deserve to walk on red carpets and who deserve our admiration and awe will forever be those ordinary men and women who serve their fellow man. I think of the first responders who ran up the buildings to save lives and the brave passengers of United Flight 93, such as Todd Beamer, who after learning via cell phone of the attacks on the WTC, joined others in a plan to burst into the cockpit and who fought with the terrorists over the controls for the plane that would later crash into that Pennsylvania field, preventing another attack in Washington D.C.

In the wake of 9-11, stories of goodness, sacrifice, and the overall beauty of humanity emerged. The preciousness of life and the preservation of serving others was now being highlighted on the evening news. I’d never been to New York prior to 2001 but in the past ten years I have gone three times, first with my daughter Sydney. Then with both of my daughters. Then with all three children and my husband. My daughter Emma and I plan to return again in two months’ time. Visiting Ground Zero and The Little Church that Stood several times now, I’ve offered up prayers and I’ve given thanks to the lessons I’ve learned from the tragic day’s events.

This morning at Sunday mass, our choir first sang “Gentle Voice”, a lovely song by Susan and Lee Dengler which speaks of how “Far above the noise of life...Jesus (is) gently calling “Come unto me”. We raised our own voices gently as we sang to the congregation and then more powerfully and with strength as we led the congregation in singing “America the Beautiful” at the end of mass. I am glad this ten year anniversary fell on a Sunday. It allowed me to be with my loved ones all day long, while in some small way, allowing me to serve others.

As I shut off the lights and head up to bed to begin another workweek, I am going to once again take a deep breath. For if I learned anything in the decade following September 11th, 2001, it is that none of us truly knows what tomorrow will bring. All that is in our control is this moment right now. Savor it. Offer it up to God. Somehow, make it count. It’ll take me just one moment to send an “I love you” message to my now 19 year old daughter at college, and moments later Emma, Paul, and Eric will once again each receive a big hug and a gentle kiss. I will say another prayer before I crawl into bed, a prayer that above the noise of life, we will all make out the gentle voice that calls to us in our times of need.

Far above the noise of life,
There’s a voice that is gently calling.
“Leave behind your cares and strife.
Come to me, I will give you rest.

Gentle voice, so meek and mild,
Gentle words of understanding.
“You are my beloved child.
Come to me, I will give you rest.

Gentle voice so full of love,
Gentle words so rich in mercy.
“You are my beloved child.
Come to me. I will give you rest.”