Room for a 6th Grader 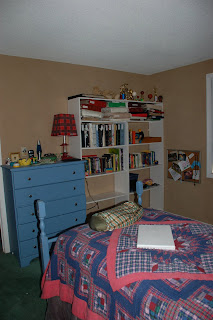 I am not sure what made me tackle the job today but this morning I told Paul to head upstairs to start "deep cleaning" his room, adding that I'd be up to help him fix his bookshelves which had come crashing down. I knew there were several hours of work ahead of me if I were to tackle the cleaning of his entire bedroom, but I started in on the "bad corner" where all of his books were and before I knew it, he and I were moving on to another corner...and another...and another.

We sorted through piles and piles of childhood books and despite doing this each year, we counted 100 books to donate to our local library's "bookbarn". I also filled a laundry basket with favorite books which we decided we'd move out of his bedroom to allow him extra room for his current library. Multiple garbage bags were filled to go to the dump and three bins of toys will go to Goodwill. Another three bins of toys were moved to the cellar. "I don't want these in my room, but I think we should keep them". Understanding how hard it is to part with stuffed animals, I was not about to squawk. (It took me years to part with some of mine from my own childhood, and truth be told, I still have some tucked away along with a few of my favorite dolls).

Forever a sweet boy, he hesitated in telling me he wanted to change his woods-themed decor, knowing how for years we'd purchased items for his room. I knew he did not want to hurt his Mom's feelings, but I suspected he'd like to feel he had a room suited for a Middle School aged kid, so I asked him what he wanted to do with his airplane shelf. He looked at me with squinty eyes, measuring my reaction and said, "I'd kind of like to take that down". I smiled and said, "Yeah, let's take that down. How about these pictures over here? Do you want to take those down too? Maybe you could get some new posters instead?" Seeing I was on board, he quickly nodded and pointed to a few more wall hangings to make similar exits. "I really want to get a chair", he added. And when I suggested we put the bureau on a different wall and move his bed, he liked that idea too. Before the day was through, my son and I had gone through every bin of toys, every inch of his closet, and every nook and cranny--under his bed and bureau too.

Finally, having vacuumed and dusted and having moved his bed and bureau to their new spots, we made up his bed. I told him how I'd chosen his red and navy blue flannel patchwork quilt as the bedspread for Sydney's room when she was just three years old, of how I'd dressed it up with eyelet lace to give it a more feminine look back then, but how I'd wanted a quilt that would fit either a boy or a girl so I could use it for years to come. "This quilt?" Paul asked. "I didn't know that. I've had this quilt forever. I like this".

Unusual for him, Paul stuck with the cleaning job as the hours passed. At one point during the bedroom overhaul, Paul and I were both seated on his floor, sorting through a bin of Legos. I flashed back to when he was just a toddler, when the two of us would sit and build towers together. It made me a little teary to acknowledge how many toys we were saying goodbye to, as if they each held the key to those memories. But it felt good to help him clean today, to help him transform his "little boy bedroom" to a space more suitable for a 6th grader, a room he'd be more comfortable to bring friends into, a room that is appropriate for an 11 1/2 year old. (I realize, too, that the days of helping him clean his room are probably numbered. I can only imagine the decor of that bedroom when he's in high school!)

When his older sister arrived home from work, Paul quickly grabbed her hand and brought her upstairs for the big "reveal". As she oohed and ahhhed over the changes, I saw Paul's face beaming. He told her of the posters he'd be getting and of the chair he needed to find.

I may have spent an entire day of my summer vacation helping him clean that bedroom today but it was worth it. And in solidifying that, I need only to think of how he slid over to me in the hallway as his sister was checking out his new room; of how he gave me a big hug, and whispered, "Thanks Mom".
Posted by Anne at 7:55 PM