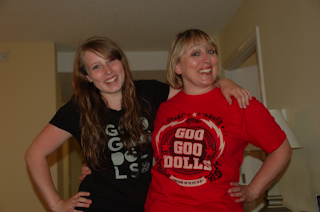 It's not everyday that I go to a rock concert. Okay, let's be honest. The last time I went to a rock concert was in 19.. Oh I forget. But it's pretty safe to say it was close to 20 years ago. Although there have been a few artists I would have liked to have seen, the thought of running into one of my high school students make my husband and I cringe. It'd just be awkward. So when my daughter mentioned buying her sister and I tickets to go see a three-in-one show in Boston for a "Girls' Night Out" to celebrate Emma's Sweet Sixteenth birthday, I have to admit, I was rather excited. This time, I had an excuse to go; I was "the Mom", the chaperone or chaffeur or maybe just the one who'd be footing the bill for the hotel, but in any case, I'd be in the city, listening to loud rock music and getting a chance to see one of the bands I'd come to like in the last several years. I even liked several songs by the other two groups that would be playing. Sure, there were other shows I'd have preferred going to but this was not MY Sweet Sixteenth Birthday, after all.

I did wonder about the age of the other concert goers. Would there be people my age? (Oh yes. I need not have worried). And would my daughters let me dance or would I be too embarrassing? That right there is a hard pill to swallow: when your children start becoming so self conscious that you aren't allowed to be who you are. For example, let me warn all you parents of teenagers out there: You can't carry a map with you in the city because you'll look like the hapless tourist that you are. You even have to go through several concert outfits to make sure you don't look too old or too young. It's a tough gig being the parent of two teenage girls.

But after getting dressed and being reassured I looked appropriate, we hailed a cab and got to the concert venue, on the waterfront of Beantown. It was a far cry from being in a hot convention center. Then I noted on the tickets that we actually had seats!? "We have assigned seats?" I asked my daughter. I had imagined being in a crowd of people on the floor. I think I was happily surprised.

My daughter spotted one of her sister's friends from high school, a friend I'd long known myself. I realized I still had her cell phone number from a few months back when we'd given her a ride to my daughter's college to see her play so I quickly texted Deanna and told her we'd seen her. In the middle of the concert, Deanna texted me back and later we saw where she was sitting and we texted her again so we could all wave. I had to laugh. Between the music and the silly texts, I was starting to feel like one of the girls. The fact that I'd caved and had bought myself a concert tee shirt, along with the ones the girls wanted, helped too, even if I will probably only wear the tee shirt around the house! HA!

The first two acts came and went. Good music. Then came the last act, the band I'd listened to the most. After a lengthy intermission the lights were on and the volume of the speakers was increased. During their first song all I could think was, "I haven't heard music this loud since I was in Paul Levasseur's car!!!!" That was back in 1986. I vowed to send him a note to tell him! But as the music rocked my insides, I smiled. It felt good to rock out, to dance (just a little), and to sing along. Then I looked over at my daughters who had enjoyed the first two artists also and thought to myself, "Wow. The girls actually look tired. Ha! Who would have thought the forty-three year old would have the most stamina tonight?!" 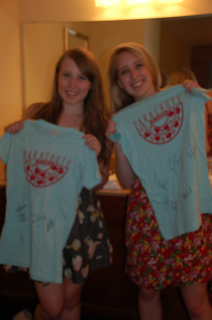 As the concert was coming to a close, the girls wanted to run out to see if they could catch an autograph from the opening group who had promised to be back out front after the show. The girls got in line and sure enough, they each got a chance to talk to the members of the group and got their tee shirts signed. I stood back and took in the scene. They both looked happy. Emma looked ecstatic and was floating on air. We walked a little ways to hail another cab back to the hotel and we strained a bit to hear one another until our ears got back to normal. Back at the hotel, we posed for one another in our tee shirts and got rather silly and giddy making funny faces as we took pictures. We made a run down to the lobby to buy some munchies and after filling our bellies the girls and I fell into bed, exhausted but content. 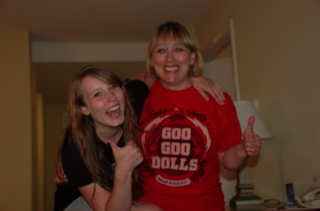 My first rock concert as the mother of three children (two teenage girls and also one eleven year old boy who stayed home this time around) went rather well. I kept up with those two daughters of mine. I had fun. Not too much fun though...I kept things appropriate. I know the role I play. I understand the limits my daughters place on me. I've got to behave. It's the only way I'll be invited to another show.
Posted by Anne at 10:53 PM