The Early Bird Gets the Cat 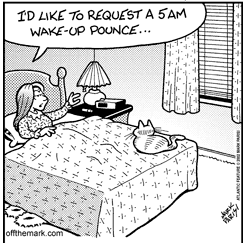 It was definitely one of those days. The cat made his appearance in my bedroom rather early. First it was a jump on the bed. Next he meowed his request for me to get up for the day. Seeing that it was only 4:00am, I ignored him. Then, a few hours later, he jumped again and stretched out by my side. After getting a little love, he ditched me and thankfully I was able to fall back asleep.

However, upon waking up again, I could tell that between the early morning feline visit and the day's humidity, I was going to be at low ebb. Rather than fight the feeling, I decided to move slowly. It would mean ditching our plans for the day and giving up a trip to the mall with my daughter, but knowing we had two very busy days of travel ahead of us, the idea of a lazy day at home seemed worth it.

Giving myself permission to be lazy in the summer comes easy when being lazy occurs at the pool, the beach, or the lake. I am also okay with being unproductive at the cinema. But taking time to stretch out on the bed, the couch, or in the recliner on a warm sunny day seems sacrilegious. "It's summer! I should be out enjoying the day! I can sit on the couch when the snow flies! Get up! Get out! Make the most of this weather!"

Then the best thing happened. The skies got darker. It began to shower. "YES! Permission to be lazy!" To secure the day off, I took a little while to pay some bills, made a run to the bank, and bought a few train tickets for our getaway the next day. And for good measure, I took the dog outside and fed the cat. Then I sat down and enjoyed that recliner. I'll probably get to bed early tonight. That way, I can actually make the early train. That way I can go find the cat and wake him up before the sun rises.
Posted by Anne at 7:36 PM