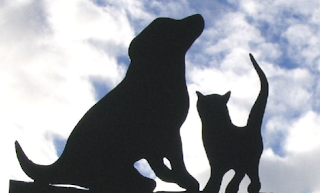 It wasn’t the most enjoyable way to spend a Saturday morning but after spotting a few fleas on our puppy and watching her scratch endlessly, we bought a can of fumigation spray and set out to rid our pets and our home of those annoying little parasites before the situation got any worse.

We vacuumed the entire house and did loads of laundry, throwing in fleece blankets, pillows, and the dog’s bed blanket. We sanitized the tile floor, sprayed the entire house, and applied the flea meds to both the cat and the dog. After airing out the place, we lit a few candles to replace the smell of the spray and called it good.

Of course I did get a little worried when I later found the cat going to take a nap in my closet. I didn’t fear the possibility of a few fleas getting in there, but instead was a little fearful of the bubble coming out of my kitty’s mouth. She had given herself a bath and had obviously been lapping at the flea medication that had been applied topically to her shoulder blades. I washed her mouth and hoped for the best. Our puppy continued to scratch off and on for awhile making me worried we hadn’t been successful, but then crashed for a good long nap. We took to watching some movies in the afternoon and by evening had high hopes we had indeed taken care of any flea problem.

Such is the life of a Saturday morning when one owns pets. But I don’t have to think twice. I can take the occasional annoyance and the extra vacuuming. The house needed a good cleaning anyhow and besides, those two loving fleabags of mine are worth the trouble. I'm pretty sure...
Posted by Anne at 3:38 PM