When I was young, my Mom used to help me throw the best parties. As a child I had birthday parties and as I grew older there were Halloween parties, Summer sleepovers, and yes, even one Disco party. That particular party sticks in my mind for my friends were so impressed with how the Christmas lights glowed off the strips of tin foil that we’d taped to the walls and how the old color wheel light from my Nana’s aluminum Christmas tree recreated a strobe light effect. My home was always the place for my friends and I to gather, the house that would host a cast party, simply, a relaxing, fun, and parent-approved party house.

So when I had children of my own I knew I wanted to help them celebrate their birthdays and other occasions with fun, creative parties of their own. From the time they were preschoolers, my children and I planned each new theme for their next birthday party. We shopped for decorations, organized games and gift favor bags, and designed invitations. I always believed the party preparations were as much fun, if not more fun, than the party itself.

So, imagine my disappointment when due to her schedule of performing as Cinderella at a local theater, Emma did not have time to plan a Sweet Sixteenth Birthday party! We had said she could organize one later in the summer if she wanted to, but no party ever materialized. I felt awful. Was Emma outgrowing parties? Did she still feel comfortable having her friends over? With Sydney off at college and Paul telling me that he doesn’t want anything fancy for his upcoming 12th birthday party, “Just a sleepover, Mom”, I began to wonder what I was going to do... 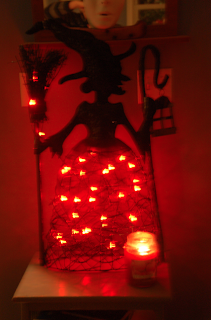 Then one day, a few weeks ago, I spotted a little hot pink post it note on my family wall calendar in the kitchen. It said, “This would be a good day for Emma to have a Halloween party”. Written in Emma’s handwriting, the note brought an instant smile to my face. “YES!!” It was not time for this Mom to retire her party planning sideline after all!

Of course, the party date could not have come at a crazier time. With tons of work to catch up on, and a house that was looking as though housekeeping had been banned for the latter part of 2011, I knew something had to give. I gave Emma strict instructions that she had to help me clean the house the night before the party. But knowing she had play rehearsal on Saturday, I also knew that bulk of the cleaning would fall on my husband and I. Still, Emma and I marched forward. A Facebook invitation may have taken the fun out of our old homemade invites of yesteryear but before we knew it, a guest list of 22 teens had formed.

Emma chose to have pizza delivered and she got her friends to help with snacks and soda. She chose her costume and as she headed off to play rehearsal, Eric and I completed the housework and went grocery shopping. I came home and decorated the house in record speed and baked some peanut butter-chocolate chip bars. The dining room table was adorned in a black table cloth with wooden pumpkins and candles as the centerpiece. Spider confetti was sprinkled around too and Halloween themed plates and napkins were added. Outside we set up an old fashioned lantern to greet the guests. Orange lights were aglow inside as Emma returned home from practice. “Oh Mom. You are so nice. This looks cool. Seriously, thank you”. Those simple words from my daughter made my night. 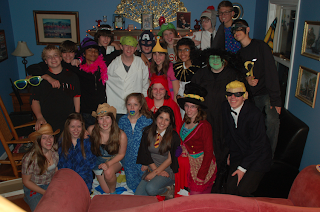 The teens arrived and the party lasted until the bewitching hour of midnight. My husband and I stayed out of the way watching television in the family room while the teens had the rest of the first floor. But I snuck in every once in awhile to enjoy the fun of their games and laughter. “Emma, you are such a great hostess”, I heard one of her friends say. I smiled. For if there is one thing I most look forward to, it’s the watching of my children carry on with the tradition of planning and hosting great parties.
Posted by Anne at 7:57 PM