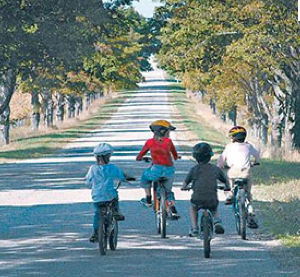 When I was in middle school I began hanging out with boys. Two in particular, Scott and Andrew, would come by my house at least once a week and ask if I wanted to go for a bike ride. We would pick up my friend Carolyn and spend the entire afternoon riding around town. We lived in a town that was quite bike-friendly. We were able to take lightly traveled roads and could reach various sections of town safely. Our hometown also had numerous Mom-and-Pop stores that allowed us to stop and buy soda and snacks along our routes.

One favorite pit stop was the playground in “Little Italy”. Buying Sunkist orange soda, the four of us would park our bikes and enjoy the swingsets. I remember laughing and blaming our silliness on the soda’s caffeine. Of course I realize now that our moods were more likely due to all those middle school hormones!

This innocent memory of my first experiences with dating inspired me several years ago. At the time I had recently returned from my 20th high school class reunion where my husband and I had enjoyed talking with my old friend Andrew for several hours. Between the reunion and memories of my hometown bike riding adventures with my friends, I began playing around with the idea of writing a novel that was titled Bike Rides with Andy. I mapped out an initial plot and crafted the first chapter. My writing group helped me workshop the piece. Over the summer I wrote the second chapter. Then Bike Rides with Andy went into hiding.

A few years later I read Her Fearful Symmetry by Audrey Niffenegger. The novel included elements that sparked me to revisit my own book. I again worked on ideas for the outline and talked over my ideas with my Creative Writing class and my friend Jeanna. Everyone was excited and I felt motivated to try again. But then I put up a wall. I blamed it on a lack of time. However I know now that once again, I’d allowed fear to paralyze me.

A change has overcome me in the past year. This has been a year of staring my fears down. I have tackled a variety of them and although I find myself slipping every so often, I can honestly say that my outlook on my life’s goals has been altered for the better. I am ready to try again. It’s time to dig Bike Rides with Andy out once again.

I am going to follow through with a specific challenge suggested by one of my daughter’s friends to write a novel in a month. November is National Novel Writing Month and NaNoWriMo.org sponsors an online challenge for anyone. As the website states, “ The goal is to write a 50,000 word, (approximately 175 page) novel by 11:59:59, November 30. Valuing enthusiasm and perseverance over painstaking craft, NaNoWriMo is a novel-writing program for everyone who has thought fleetingly about writing a novel but has been scared away by the time and effort involved. Because of the limited writing window, the ONLY thing that matters in NaNoWriMo is output". The challenge is about “quantity, not quality”, and although what I produce may need serious editing, the goal is to write intensely and without self criticism to put the words to paper. This is always the first step after all.

It wasn’t a pointed challenge but Deanna put it at my doorstep and having thrown the challenge out to my own students in the past, I now want to try it myself. One of my Creative Writing students last year was successful with it last year and had his novel self-published for his graduation. I was pretty darn proud of having pushed him in this direction! Ben’s book sits on my window bookshelf. Now it’s my turn. Sure, I have a lot on my plate but if I were to wait for the perfect time to write, I’m afraid I would never get there. I am not going to consider myself a failure if I don’t make the deadline, but I will be disappointed in myself if I don’t at least TRY.

Just as my time with Andrew and Scott back in Middle School was my starting line when I began hanging out with the opposite sex, Bike Rides with Andy will be my starting line for my novel. I have no idea what my finished product will look like. I don’t know whether I’ll stick with my initial ideas or abandon them and take a detour, but I am getting familiar butterflies in my tummy once again. It’s almost as much fun as trekking around town on my ten speed all those years ago. Or perhaps it’s simply the caffeine.
Posted by Anne at 11:28 PM