It was a strange day. From the moment I began my first period class I knew the day would be out of the ordinary. I could feel it. Although I had planned an activity, I could sense I was going to stray from my original plan for my classes. 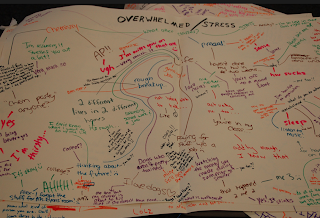 This happens every so often. After teaching for 20 years I have learned to trust my instincts. I found myself telling my students of an activity called a “Silent Socratic Circle” and I guided them to form two groups at the front of the room. They were given a prompt of “Overwhelmed/Stressed” and invited to have a group conversation. However, they could not actually speak. They were to write down their conversation. Each student was given their own individual colored marker so group members would know who was saying what if the group should occasionally break into more than one thread of conversation at a time.

The students wrote furiously. There was some giggling as their conversations included humor but they took the task seriously. I added in my own comments in a black marker, guiding them to new angles of discussion or asking a question of clarification. They wrote and they wrote for over 20 minutes. If I had not stopped them, I have no doubt they would have continued.

I decided to do the same activity with my second period class. This group, much more diverse than the first period class, wrote even more passionately about the prompt. They vented about the stress of juggling school, work, and personal issues and when their 20 minutes were up the group and I talked for the rest of the period about the realities of stress and time management. Again, it was not how I had planned to spend the class period but Hamlet could wait another day. This discussion was needed by all today, including myself.

At the end of each class period I told my students how I too was feeling overwhelmed by all that is on my plate. I shared with them my own reactions to stress and what I try to do each day to lessen the anxiety. We shared strategies on how we could better manage our time and motivate ourselves to tackle our To Do lists when all we want to do is bury our heads in the sand.

After these two class periods I was half way done with my school day, yet I found myself continuing to stray from the usual routine. I took time at lunch to catch up with a new friend and colleague. It was nice to be reminded that the two of us look out and care for one another, even when it seems we have little time to talk in person. During my prep period I wrote an email to another teacher friend and shared that I had recently learned we have something rather personal in common. Andrew came by to see me before the day ended and thanked me for reaching out. We’ve made plans to talk further next week.

As I packed my school bag before leaving for the day I realized I still had all of the correcting folders that I’d had when I went to school that morning. My bag was just as heavy. There has been no progress made on my correcting. Yet today was far from being a failed day. It has been a day of taking risks, all very appropriate but challenging just the same. I am exhausted and I found myself sobbing on the way home from school. It didn't last long though. I had just needed to release the day’s energy. It was a strange day at work but I know good things happened today.
Posted by Anne at 7:21 PM