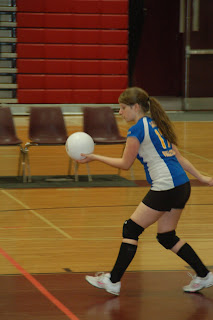 I zipped home to pick up Paul and off we went to bring Emma to her volleyball game at a school over an hour away. She had missed the team bus having arrived back at her school an hour or so late after having attended an All-State music audition so I had told her I’d bring her to her game. Upon our arrival at the school, Emma went to join her team and Paul grabbed a slice of pizza at the snack bar. The two of us sat down in the bleachers, watched the end of the JV game and awaited Emma’s Varsity Team to begin their game, their last game of the season.

New to playing as a full-fledged team as opposed to being at “club status” as they were last fall, the team has had its challenges but have done well in their matches. Emma was solid in her role as setter and aided her team well. It’s been good to have her enjoying the game and the team experience. She has taken a few young players under her wing and has demonstrated strong leadership qualities. She makes me proud every day, but to see her determination, competitive drive, and desire to improve reminds me of what a fierce young lady she is, and that makes me happy.

In the final minutes of the game, as she was setting the ball, she let the ball hit her left hand farther back than it should have. Her thumb was pushed backward and she sprained the ligaments there. She let the ball come back down on her injured hand before signaling to her coaches that she needed them to call a time-out. She went to the side and was in great pain. It may have been what the coaches called a “typical setter’s injury” but that did little to comfort her as she saw her hand swell up. After some confusion that put her back in the game so she could be formally taken out of the game, she settled on the bench with a bag of ice. It was only then that I realized the reason for the time-out. I mouthed, “Are you okay?” from across the gym and Emma nodded back to me. Luckily, the swelling did subside and a day or so later she would have only a dull ache. 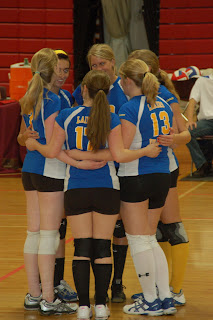 Although I played one year of tennis in high school, I did not have much of a career in sports and I missed the experience of being on a team, working together to form a strategy or enjoying the thrill of a win. I think I would have enjoyed having joined a team sport for I know I have that same competitive spirit and that same level of determination and desire to improve. I had almost gone out for the softball team when I was a freshman in high school but I had been intimidated by upperclassmen who were so much stronger than I was at the time. I wish I’d known then what I know now, that I would have been supported and groomed by those girls. I would have had an Emma who would have taken me under her wing and who would have shown me the ropes. Ah well. I don’t have many regrets in my life but not trying out for a team sport is one of them.

Still, there is something most rewarding about watching my daughter accomplish something in her young life that I have never done. It is a reminder to me that I have raised a confident and strong young woman who is ready to take on the world. Sure, there may be an injury or two along the way, but the bruises will fade and any swelling will subside. She will forever stand on her two feet and embrace others around her as she fights for the win. I will forever be there to cheer her on from the sidelines. And who knows? Maybe she’ll even inspire me to finally join a team myself someday. After all, it’s never too late to go after the dreams of yesteryear.
Posted by Anne at 10:33 PM