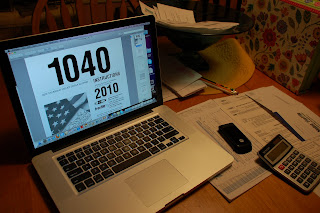 Ol’ man winter isn’t saying goodbye just yet. Despite a rather calm and sunny week, another big snow storm was in our forecast for the day. I would not have minded if it were not for the fact that my husband and daughter would be driving home in the awful weather. So much for the start of her spring break. Spring, it appears, will not get here for awhile. We made the decision that he'd drive north a day early so as to be there already when she was done with her morning exams.

Anticipating the next day, after he left I spent the day staying busy. I rarely sit when I am nervous and even though the storm wouldn’t arrive until the next day, my mind needed distraction. So I cleaned. I did laundry. I put clothes away. I organized the bill drawer. I got my son to organize his bureau. I packaged up clothes for Goodwill. I cleared off surfaces. I tackled the pantry. I even scrubbed the floor.

They left after her exams for what is usually a two and a half hour drive home. They called me to let me know they were getting on the highway. By then I had already baked cupcakes and I’d roasted a chicken. I’d done all the laundry and dishes were clean. When a friend alerted me that there were several cars off the road, I knew it was time to get serious. That’s when I tackled my taxes.

Between phone calls and texts I was kept apprised of their location as were my friends online. I called out for everyone’s prayers. I knew they were taking it slow but you just never know what the other guy on the road is going to do. My friends delivered. Meanwhile, my cell phone sat next to W-2s, mortgage interest forms, and Goodwill receipts. They moved past Veazie. I printed off the 1040 form off the internet. There was a scary encounter in Pittsfield. I filled out Schedule A. They reached Waterville. I moved on to the Child and Dependent Care form. They made it to Lewiston. I had most of the numbers crunched. When they got off the highway I threw together a family favorite meal, chicken pot pie, so they’d have a warm meal to come home to.

And when they both came through the door, four and a half hours later, exhausted from a nasty drive home but safe and sound, I hugged them both tightly. Soon I’d crash and sleep soundly. Ol’ man winter can do what he wants now. My chicks are all safe and warm in the nest. And what do you know? The taxes are done too!
Posted by Anne at 10:19 PM