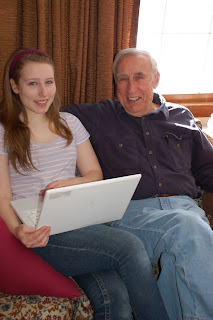 If there's one thing I love about my Dad, it's his honest connections with his children and grandchildren. I remember his talking to me about all of my various ideas about college and careers when I was in high school. After realizing that I was not going to go to his Alma mater, Maine Maritime Academy, he began suggesting various careers to me. He thought I should become a lawyer when he saw how much passion I had to be just and how much I enjoyed research. He thought my confidence on stage and with public speaking would serve me well in the courtroom. I am sure he was a little worried when I initially decided to major in theater. Yet, he did not do anything but support me. With each change of major when I was in college, from theater to communication to English, he'd ask questions and suggest new paths for me to take. So it came as no surprise when he began talking to my eldest daughter about college. He's still wondering what career path she will take and he continues to put in his two cents, but today he focused his attentions on my younger daughter.

I heard part of the discussion from downstairs. Emma's grandfather began asking her about her plans for the future. There was talk of Emma's passions for music, theater, and writing, and several questions about college. I smiled. I did not need to hear the entire conversation for I knew what each of them would say. As expected, Emma had solid control of the conversation, even when her Grampy started warning her of living in a big city. She spoke of her ideas for her future but admitted to still needing time to figure everything out. But she made one point clear, "I feel I have to at least try, Grampy. I can't give up before I try". That's my girl.

The conversation touched me on many levels. First, I was proud of my daughter who has a good head on her shoulders but who also has developed a confident spirit to guide her to those moments when it takes extra courage to leap to the unknown. At the age of 15 she is exactly where she should be, dreaming and thinking of all the possibilities for the future. There is plenty of time for her to solidify her plans later. Secondly, I smiled at my Dad's protectiveness. I inherited this quality from him, no doubt. But he's doing exactly what he should be doing, speaking logically and rationally about the risks and challenges of big city living to a young grand-daughter from a small town whom he wishes to keep safe. Finally, I appreciated what he said next. "Maybe you'll even do as your Mom did. She's passing on her talents to the next generation by being a teacher".

My daughters both know that I too contemplated a career in the fields they are presently exploring. But they also know why I changed my mind and ultimately became a teacher. My Dad knows these reasons too. For despite my passion to act and sing, what I wanted most in this life was to be a happy wife and a good mother. Sure, I am proud of having become a teacher also, and I continue to aspire to write and sing and act on stage in my spare time, but my greatest achievements will always be my marriage and my three children.

What do you want to do when you get older? I want to be like my Dad. (No, I don't wish to graduate from Maine Maritime Academy, be a midshipman, or retire from Great Northern Paper Company after many years as a Groundwood Superintendent). I want to continue taking care of my family as best I can by showing them honest concern and attention for the rest of my life. I want to be that parent, or someday grandparent, who slips a few bucks into their hands when they come visit, who invites them to play a game of pool so as to have opportunities to talk and play together, who sits down on the couch on with them and asks, "What do you want to do in your future?" Yes, I want to pass on my talents to the next generation, just like my Dad.
Posted by Anne at 6:59 PM