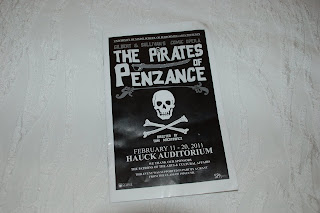 After traveling to Hauck Auditorium to see Sydney in her first college musical, we were more than excited. The orchestra began to play. They were impressive.We had butterflies as the curtain began to rise.

The lights came up and a pirate ship sailed across to center stage. The costumes were gorgeous. The pirates began to sing. Strong voices. Articulate diction. It had been only thirty seconds and I was already smiling. 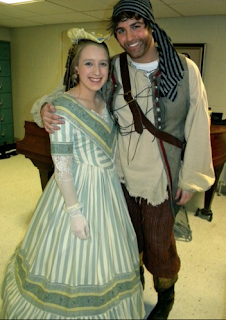 It would be fifteen minutes or so into the show, perhaps more, before the girls would come on the stage. Sydney as Isabel entered from upstage left. There she was, adorned in a full length gown, petticoat, hat, and curls. "She is beautiful", Noemi whispered to me. Yes, she is.

She had only a few spoken lines this first time but her voice was strong in the ensembles; I could hear the rich alto harmonies. Her face was expressive and she never was out of character. By intermission my mouth was glad to have the break from smiling. To say I was proud of my girl is an understatement.

The Pirates of Penzance was a thrill to see tonight. A funny and wry Gilbert & Sullivan musical, the cast and crew did a beautiful job. We'll return tomorrow for the Sunday matinee and next Friday to see the show a third and final time.

After greeting our actress daughter, we walked to her dorm. I felt great pride as I took in how comfortable and happy she is. She quickly packed a bag to join us back at our hotel for the night. 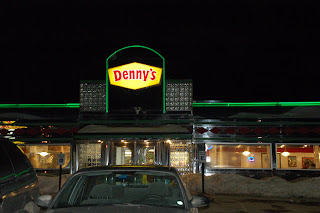 We made one more stop at Denny's for a late snack. Over pancakes, eggs, sausages, and desserts, we listened to her stories of the production and of her happiness with her new theater friends. We heard tales of each aspect of the show and got the bios on all the actors.

As I watched and listened to my college girl, I felt great satisfaction. She is happy in her choices. She is confident and secure. The butterflies I felt tonight as the curtain began to rise will probably be there tomorrow afternoon and next Friday evening also. I know this because the excitement and pride I feel for my girl is a constant. She is indeed beautiful. But it is not because of her costume, her curled hair, or her make-up adorned face. Her beauty stems from something deep inside. It doesn't take the lights on stage to make my girl shine. The light of who she is and what she can do can be seen in her beautiful blue eyes. I am excited for her future. I am proud to be her mom.
Posted by Anne at 11:58 PM