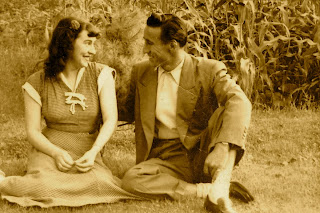 I remember when I fell in love. Or rather, I remember when Eric told me, "I think I love you". I was just fifteen years old. He was eighteen and he gave me butterflies in my tummy and made my head spin. I couldn't believe he saw something special in me. After all, I was just a baby. He even convinced me that I was beautiful, truly beautiful. I actually think I fell in love with Eric one day when I made him laugh. I had no idea that I could be so funny. That was a quality I'd seen in my brothers and my sister, but not in myself. When he genuinely laughed and thought I was witty, that's when I think I fell in love with him.

Eric was a senior and I was a freshman. My sister had been a bit alarmed with my dating "an older man", but my Mom and Dad liked Eric. My parents were pretty sure that Eric would move on when he went to college. He didn't. I did. I was fifteen. There were a lot of cute guys that I enjoyed flirting with in high school! But I could not let him go for too long. I ached for him when he was away and I fell into his arms quite naturally when he was back in town on breaks from school. By the time my Junior year prom rolled around, I knew I didn't want to risk losing him forever so I held on to him and didn't look back.

He asked me to marry him when I went to college. I thought I was too young so I kept saying no. But one day I went home and talked to my Mom about his proposals. She and I had a good long talk that day. The summer after my Freshman year in college, I said yes. We kept our engagement a secret for a little while but not for long. And on Thanksgiving break during my Junior year in college, we were married. 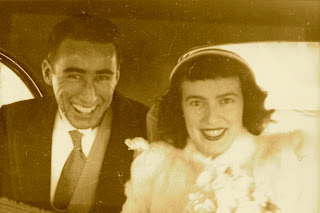 That was the easy part. Since that day in 1988, Eric and I have grown. We have fallen more deeply in love and have become even better friends, but it hasn't all been easy. We have had a lot of fun and we have had our share of struggles. Falling in love is easy. Marriage takes work. We are incredibly lucky however, because although we married quite young, at ages 20 and 23, we chose to grow (and/or to grow up) together. Either one of us could have made any series of choices that could have put a wedge between us. Either one of us could have given up, or taken rest when we needed to keep working when times got hard. Either one of us could have entertained the idea of seeing something better or at least something "fresher" along the way. But we always chose each other. We always chose to believe that we were meant to be together, until death do us part. We had taken our vows to heart. We never considered them being anything other than sacred vows we'd made before God. 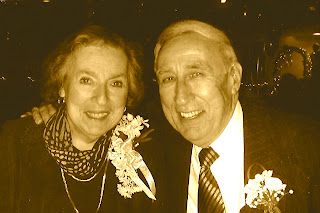 On this day, my Mom and Dad's 60th Wedding Anniversary, I want to thank them and other loving couples in our life who have shown us how to work at marriage. By their example, Eric and I have strengthened our love for one another. He's my best friend. He's my everything. After our first 22 years together as a married couple, I can honestly say that I have never felt stronger butterflies in my stomach than I do today. I have never been wittier or more special or more beautiful than I am today. And never have I ever been more in love.
Posted by Anne at 7:56 PM