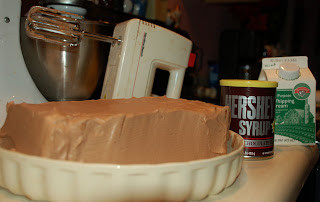 Growing up, before our birthdays, my Mom would ask each of her five children what kind of cake they wanted her to bake. My brother Bill always chose German chocolate cake. John wanted an orange pound cake with vanilla icing. I had two favorites and would alternate between requesting a chocolate cream roll or a chocolate refrigerator cake. The refrigerator cake has always been a favorite and I found myself making one tonight, even though my own birthday is more than two months away. I suppose I was in need of a little comfort food as it's been a rough end to the work week. So I whipped up the cream, added the Hershey's chocolate syrup, and took time to frost the graham crackers, then placed it in the fridge to soften for my family's enjoyment tomorrow. 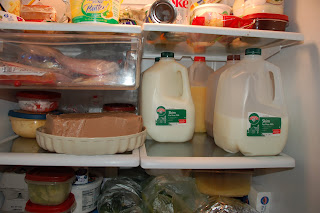 With my own children I have continued the birthday-cake-of-choice tradition, although being a full time teacher, I am always secretly pleased when one asks for a store-bought ice cream cake or that scrumptious peanut butter cup cake they sell at the corner grocery store. But over the years I have baked and frosted my share of homemade cakes also. Some of my favorites include the Tinkerbell cake I made for my daughter's third birthday, a Barbie doll dress cake I prepared with my sister's help (while hysterically laughing as she insisted we should chop off Barbie's legs to get her to stand in the cake correctly. Don't worry. I wouldn't allow the operation; Barbie's legs were saved), and my son's Lion King cake that had to be salvaged when our dog jumped up and devoured half of it when I wasn't looking. "Oh wow. Now it really looks like Pride Rock, doesn't it?!"

But later this month my eldest daughter will celebrate her 19th birthday away from home. She'll be two weeks into her second semester of college and although I am sure she'll have a fun time celebrating with her roommate and her new friends, I will miss lighting the candles, singing Happy Birthday, and watching her open a present or two afterward. Her younger sister has already put in a request that we still have cake on the 21st, and although we've teased her about simply not wanting to miss out on cake, I think we're all feeling a little strange about this new milestone in our family. So I think it's only fair that we Skype with our birthday college girl that night and have her pretend to blow out her candles over the internet. That way she can have her cake, and we'll eat it too !
Posted by Anne at 8:57 PM