Getting Out of the Boat 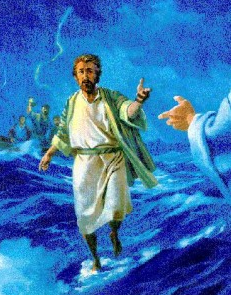 Lent. These 40 days preceding Easter mark a season of prayer, penance, sacrifice, reflection, and good works. Growing up, my family and I began Lent with Ash Wednesday. Having ashes placed on my forehead at Mass, I would make my way to a mirror after church. The mark of the ashes was meaningful and of great importance. The ashes gave me strength. They gave me hope.

Lately, I’ve been tired. I have lost hope in a variety of areas. But that isn’t who I am. So, as the season of Lent begins, I am going to grab onto this opportunity to get myself back on track. I will work towards conversion and to prepare myself for Easter, for Spring, for the Resurrection--Christ’s and my own.

In the past several months I have slipped. Normally quite determined and strong, I have strayed too far for too long. It’s time to get myself back. My words here may be vague but I know exactly what I am talking about. Perhaps over the next 40 days I’ll share some of those points where I’ve been sidetracked and have gone astray. But tonight, the evening before Lent begins, I am reminding myself that God needs me to keep going on this journey. He’s not through with me yet.

I read a passage in my devotions book. Jesus said, “If you believe, you will receive whatever you ask for in prayer”. (Matthew 21:22). God’s ear is turned toward those who pray to Him in faith. Peter was the only one who walked on water beside Jesus, but he was also the only one who got out of the boat. Until you make a decision to believe, and then act on it, nothing will happen”.

The passage makes reference to the story of Peter and other disciples of Jesus who were sent ahead of Him in a boat to cross the Sea of Galilee. Several hours later in the night, the disciples encountered a storm. Jesus came to them, walking on the water. The disciples were terrified upon thinking they were seeing a ghost but Jesus told them, "Take courage! It is I. Don't be afraid." Peter spoke to Jesus and said, "Lord, if it's you, tell me to come to you on the water." So Jesus invited Peter to join him. Peter got out of the boat and began walking on the water toward Jesus. Yet when Peter began to take note of his fear, the wind and waves, he began to sink. Peter cried out and Jesus immediately reached out His hand and caught Peter.

I’ve allowed other people, other elements, other influences to interfere with my journey in negative ways. I’ve been sinking deeper and deeper into fear. I’ve allowed wind and waves to halt me. That ends tonight. I am not presumptuous in thinking I’ll be walking on water any day soon, but I am ready for the ashes of this season.