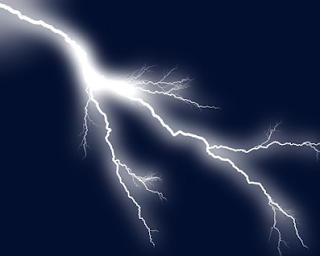 Don’t get me wrong, I think thunderstorms are pretty cool. I love them best when I am at my camp on the lake where I can see the weather moving across the lake. My grandmother used to fear them, but I am not afraid. In fact I love their drama. Yet every so often there is a powerful thunderstorm that jars me awake and which plays upon my imagination that unless I keep my eyes wide open until it’s over, my house will be struck by lightning. I do fear fire. So, whether it is out of a love for the dramatic or concern for my roof, it is rare that I will roll over and return to sleep during a mid-night lightning show.

When the children were younger, one clap of thunder would send them to our bedroom during storms. Rarely would they cry, but one by one, each would crawl out of bed only to slip under the covers of ours. One would pop between Eric and I. Another would sidle up to my side of the bed, waiting for me to lift up the covers in invitation. There were a couple of times when we’d have all three children with us. And the dog. Charlie was terribly frightened of thunder. She’d whimper and shiver until we invited her to join us in bed. That’s usually when the giggles would start and the storm outside was nearly forgotten.

In my mid-forties, I am beginning to read of my friends’ experiences with “empty-nest syndrome”. With another six years before Paul graduates from high school, I don’t often worry myself with such thoughts of what it will be like to be childless. But every so often it is quite apparent that I am no longer needed the way I used to be. And nights with thunderstorms, when I am the only one awake, well, those nights most certainly drive home how life has changed. Our dear Charlie, even, is no longer with us. And the new pup, even at the age of one, sleeps through thunderstorms on the bedroom floor without a care in the world.

The other night we had a powerful storm just after 2:00am. “It’s okay”, I told myself as I watched the skies light up and counted the seconds before hearing a clap of thunder. My husband slept peacefully beside me. I took a deep breath and flipped my pillow over, thinking that maybe, just for once, I’d try to fall asleep before the storm ended. But that’s when I heard it. My heart skipped a beat. The bedroom door opened a crack and that mature, cool twelve-year old son, my baby, peeked his head in.

I had to play this right. “Wow, I’m surprised that your sisters aren’t in here already”, I whispered to him. “This is a really powerful storm”.

“Can you believe how close the lightning is? I can barely count a second before I hear the thunder”, I added.

That’s when I took the chance. I flipped back the covers,  hoping he’d accept the invitation to wait the storm out with me. But I prepared myself for the rejection. In my head, I counted. One. Two. Three. Four.

It was the best thunderstorm of the summer.