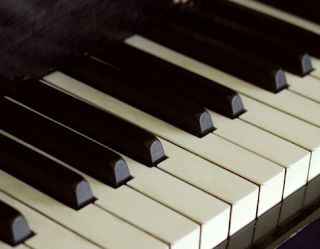 If I took care to tiptoe down the stairs, I sometimes caught her. I did not let her see me, for I knew that if she did, I risked it ever happening again. I became sneaky. Hearing her fingers on the ivories, I made my way only to the top landing. From there I could hear her playing the keys, however rusty in technique. She played only because she thought she was alone.

I’d once, unknowingly, walked up to her in the den. Her hands leapt off the keys when she spotted me and I excitedly told her I did not know she could play piano. She pretended not to hear me. Moving swiftly, she stood up and tucked the music book away inside the bench, then promptly left the room. That’s when I realized my mistake. From then on, I stayed on my high hidden perch, realizing this melody of hers was especially beautiful in its rarity.

A few years later, we moved to the house across town. It was a smaller home but it sat proudly on a beautifully landscaped lot and gave the appearance of being much larger. The piano had found its place on the lower floor of our house. I never heard Mom play it in the new home. Maybe, knowing the music would be carried easily up to the second floor, she only played when I was out of the house. I don’t know. But, in any case, I never heard my Mom play again.

I’d begun taking piano lessons the year before the move and although I could no longer walk to my teacher’s home, I soon began taking my bike. I carried a small backpack and at my lessons I progressed through levels of instructional books and began learning pop tunes, much to my delight. Once a year the students put on a recital. I took these in stride. I wasn’t overly nervous of playing in front of others, but I did not anticipate each year’s recital with any great excitement either. The truth is, from an early age, I knew my relationship with the piano was going to be a casual one. I had only begun taking lessons because my teacher had told my Mom my fingers were too small at age 8 to take up the guitar, the instrument I had wanted to play. I loved playing piano, but I suspected correctly that I was of average talent. I should have practiced more. I often was too distracted. I’d sit at the bench faithfully for 30-60 minutes a day, but after going over each of my assigned pieces, the piano was the backup for my singing. I worked to refine what would become my number one instrument, my voice. But my time at the bench was not in vain, for in the years to come, the piano would open doors for me.

My father who, like me, loves to sing, began asking me to play the piano or the organ at my grandmothers’ nursing homes. The two of us developed quite a following. Residents at the homes came to look forward to our visits. We’d play and sing each week. That’s when I first learned of the joy that music can bring to others. As the elderly men and women congregated in the hall to hear me play, I felt good. It didn’t matter how well I played, only that I showed up to entertain them.

In five years’ time I would join the school’s jazz band. The atmosphere of the school’s music room and the band directors I worked with, gave me a home. My fellow musicians became my closest friends, and a few became my first boyfriends. Moving to the high school, playing the piano introduced me to two gifted pianists. I had been right. I was of average talent. But the talents of the two older girls I shared parts with went far beyond their ability to play the piano, and their kindness and acceptance of me gave me a confidence that I have never abandoned.

Our jazz band went on to win many awards, even after the two gifted pianists graduated and I was left at the keys with younger players. I had my last recital at age 18, but by then Mrs. A and I had established a habit of talking for the better duration of each week’s lesson. She’d become a dear friend and I never forgot her words to me. At one of my final lessons, she told me that she realized early on that I wasn’t going to work hard to master the piano, that I however would enjoy my time at the keyboard each time I sat down to play. She had wanted to foster that love of music, that natural sense of musicality. “I just wanted you to keep playing”, she told me. I thank her for that.

As I grew up, Mom rarely sat down at the piano bench, at least I didn’t see her there much. But she loved to hear me play, even years later when she and Dad brought the piano to my new home that my husband and I had bought just prior to the birth of our first child. I admit, since becoming a Mom, I don’t play often, but I do still play. I’m pretty rusty and I am shy about playing in front of many people, so I understand where my Mom was coming from, all those years ago. But I have pounded out the melodies to audition or church cantoring pieces for my daughters and I, and I once joined my son’s cub scout troop, volunteering to play the accompaniment as they sang Christmas carols at various nursing homes. I still love to play from my favorite book of Chopin pieces and I do take out my pop music books from time to time and I let the music fill my home, no matter who is listening. My children don’t sit at the top of the stairs, however. Most of the time, they are right there with me, sharing the bench, and singing.