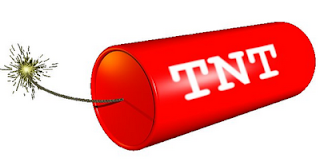 A few years ago my husband turned 44. On his birthday I began a whispered chant of “TNT ! TNT!” in honor of his turning the same number as our local cable television’s Ted Turner Network tv channel, otherwise known as “TNT”. Throughout the year when Eric would mention he was 44, I’d begin. “TNT! TNT! TNT! TNT!”. Oh, I knew I was antagonizing him, but I couldn’t help it. It must have been a very long year for him.

But yesterday it was my turn. The day began with a surprise when I accidentally turned off my alarm clock instead of hitting the snooze button. Thankfully, my daughter turned on the hall light 50 minutes later which awoke me. We managed to get out of the house at the normal time (thank goodness for a new wash and wear hairstyle!) and our day at school began.

My teaching day went well but I was antsy. At one point in my day I was correcting essays and I stopped for a minute and thought to myself, “What did I do on my 43rd birthday?” I could not remember. So I turned to the entry I had written on my blog and was a little disheartened to see that I’d written about crying in my classroom. “I cried on my birthday last year?! Really?!” I had forgotten. It had been a day of feeling overwhelmed by everything. So, I made a mental note. At around 8:00am, I thought to myself, “Here I am, 44 years old. Today I am working at my desk. I have a class of students here in study hall who have their backs to me (a new rule due to the fact that we must keep a close eye on their laptop use), and I’m correcting rhetorical analysis compare-contrast essays written by my AP students”. Hmm. Wow. That didn’t sound memorable at all.

The next block I talked with my juniors about dystopian literature (a love of mine) and early western philosophy, namely Plato’s Allegory of a Cave. Although they enjoyed the claymation video I showed them to illustrate this concept, that hour with them probably would not be memorable either for any of us. I had to improve this day! During lunch I couldn’t decide where I wanted to have lunch. I opted to give my introverted self a break and to spend time reading. Pleasurable, but probably not memorable.

The end of the day brought a quick trip to the grocery store and then my husband and I headed home. We were fully aware that the only chance we had to enjoy some birthday cake was before Paul’s basketball practice and Emma’s dance lesson. Within five minutes of getting in the door, we were yelling upstairs to the kids, finding candles, and opening up the ice cream carton. The scene was a bit frantic. I plopped a single candle into the middle of a triple chocolate truffle cake Eric had bought me and lit it. “Mom! You’re lighting your own birthday cake candle?!” my daughter asked incredulously.

Emma then grabbed the cake from me and began to sing. I looked up smiling and saw that she had left the room. “Where’s my cake?!” I laughed. But by then everyone was singing in full force as Emma led the cake around the downstairs in an impromptu parade. “Has the candle gone out?” I asked. Emma stopped the parade and her singing to double check, then seeing the candle still flickering, continued onward. Safely back to the kitchen counter, we sliced the cake, served up ice cream, and dug in. Within the half hour, we’d be off in separate directions, but for now, we were having cake and laughing together. This was a moment I wanted to remember. The world had stopped for just a few minutes. I was taking notice for future years.

The end of the day brought us back together but very briefly. My eldest girl called to wish me Happy Birthday. Soon, the hours of the day were winding down. Before retiring for the night I spotted my son asleep in the recliner in front of the tv. I whispered a suggestion that he head up to bed and went that way myself. Within five minutes, his sleepy head popped into my room. He slid into my bed and rested with me for a few minutes and we began playing a “I can make you laugh” game. It was silly but once again, the world was pausing for me.

Emma’s parade of cake, a quick phonecall from Sydney, and that rare bedtime cuddle with Paul will surely prove to be memorable. If not, I’ll at least be able to look back at this year's birthday blog post and know for certain that there had been no crying this year. Not today anyhow. In fact, my TNT birthday? It could not have been more dynamite.
Posted by Anne at 1:57 PM