My Journey with Harper Lee's Go Set a Watchman 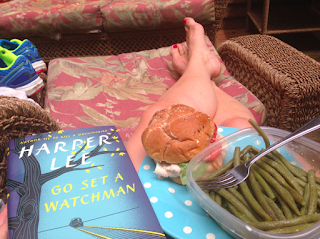 I was out on my back deck having my lunch as I read the last twenty pages. After finishing Harper Lee’s Go Set a Watchman, I cried. It cannot be a coincidence that I ended the book just as it began to rain. My nose got tingly and my eyes filled with tears. “Well done, Miss Harper Lee”, I whispered into the air. “Thank you”.

I was teaching Freshman English when I first met Scout, Atticus, Tom Robinson, and Boo Radley. My own high school years had been devoid of reading many classic novels, much to the chagrin of my mother who never failed to remind me that she was disappointed that a certain teacher, a proponent of classic literature, had retired just short of my entering high school. So it was after I became a teacher that I was introduced to many novels that had passed me by as a student. Harper Lee’s To Kill a Mockingbird quickly became a favorite and as is the case whenever I teach literature year after year, I grew to love and to fully know the characters. I even named my cat, Boo.

Years later I came upon Charles J. Shields’ Mockingbird: A Portrait of Harper Lee (2007) and I devoured it. I remember sharing my discoveries about the author with my students and with my husband. My admiration for Nelle Harper Lee grew as I read about her life, her work, her writing of TKAM, and her circle of family and friends, including the colorful Truman Capote who had inspired the funny little boy, Dill, in her famous novel. Then, last year, another book about Harper Lee was published, Marja Mills’ The Mockingbird Next Door: Life with Harper Lee (2014). I was halfway through the reading of this book when allegations of the book being unauthorized came to my attention. As covered in USA Today, in July 14, 2014, Harper Lee wrote: “Normally, I would not respond to questions about books written on my life. Miss Mills befriended my elderly sister, Alice. It did not take long to discover Marja’s true mission; another book about Harper Lee. I was hurt, angry, and saddened, but not surprised. I immediately cut off all contact with Miss Mills, leaving town whenver she headed this way”. I read Harper Lee’s disclaimer that she had given the author her blessing, that journalist Mills had forged this friendship with both Nelle Harper Lee and her older sister, Alice, and I began to fill ill at the thought that perhaps both sisters had been duped by someone who had used them to make a buck. I hesitated but then finished Mills’ book, cringing the whole time, and feeling unsettled in what now felt like an invasive, voyeuristic experience.

So when I first heard of the publication of Go Set a Watchman, my first thoughts went to Miss Lee. I felt a fierce protectiveness. The recluse author who had never published any other novel was now elderly. Had she signed off on this? Were people again taking advantage of her? Was she of sound mind? Why now, Miss Lee? I felt sad at the thought that a writer who had refused to publish a second novel for decades may have been the victim of someone taking advantage of her. I wanted to say, “No. I won’t read this”, as if refusing to purchase the book would make me a better person or would do right by Harper Lee. But in early June, I preordered a copy. And a few weeks’ later, somehow having forgotten that I’d done so already, I ordered it again. That’s right. On July 14th, 2015, two copies of Go Set a Watchman by Harper Lee arrived on my doorstep. As I lifted the books from their packing box, I started to cry. “Are you crying?” my husband asked me. “WHY?!”  I didn’t answer him, but it was because I knew what I was holding in my hands, something I’d longed to have for decades, another chance to read the writing of Harper Lee.

When the news first broke out about this novel’s publication, it didn’t take long before folks weighed in on the book. Confusion abounded and people corrected one another. “It’s not a sequel!” they said. “It’s actually a prequel”. “No, it’s the first draft of the novel that eventually became To Kill a Mockingbird!”  I read enough to learn that it was the novel that Harper Lee had first submitted to her editors in the 1950‘s and that with their suggestions on how the book could be reworked, Harper Lee had completed serious revisions to craft the now famous classic.

I told myself I was going to read the book so I could further learn from the author from a writer’s point of view. Perhaps that is how I was justifying my desire to read more from Harper Lee. But thankfully, I first came across the PBS American Masters’ broadcast on July 10, 2015. This documentary of Nelle Harper Lee was full of information I already knew having read Fields’ and Mills’ biographies, but it gave me the peace of mind that Miss Lee was indeed fully cognizant of the publication of Go Set a Watchman. Her response to it? “It is what it is”. I got what I considered enough of a blessing to go at it.

Now, before I actually started reading the book, I came across more discussion from those who read the book before me. I heard Atticus being called a racist and I saw headlines to other articles that said the novel was a “disgrace”. It had done wrong to the noble American icon,  Atticus Finch. Others say Harper Lee’s Go Set a Watchman should never have been published, that Atticus has been grossly tarnished. Or that To Kill a Mockingbird should have remained pure!  One reviewer on Goodreads, “Khanh”, said, “Sometimes, I want simplicity, and I want bliss in ignorance”.

Well, there it is. If you want things simple, if you want to remain blissfully ignorant, by all means, skip this book.

But I, for one, have no regrets having read Go Set a Watchman. From the King James Bible: For thus hath the Lord said unto me, Go, set a watchman, let him declare what he seeth” (Isaiah 21:6), the verse speaks of being set on the right path and of listening to one’s conscience. Once set as the original title for To Kill a Mockingbird, it’s actually a very fitting title for this “new” book. Lee’s book, for those who are ready for it, imparts a fuller understanding of what it means to form a conscience and to be human. I have learned from Harper Lee once again. I, like Scout, believe in honesty, even when it hurts. And I, like Atticus Finch, believe in giving everyone their say, even when their beliefs go against mine. I am not afraid of the truth that all people can help me in one way or another.

Near the end of the book, Scout’s Uncle Jack tells her, “You’ve no doubt heard some pretty offensive talk since you’ve been home, but instead of getting on your charger and blindly striking it down, you turned and ran. You said, in effect, ‘I don’t like the way these people do, so I have no time for them.’ You’d better take time for ‘em, honey, otherwise you’ll never grow...”
I can’t but help to snicker when I read of people running from this book. I don’t mean to suggest that anyone who isn’t secure in their understanding of how a writer writes or who cannot separate TKAM from its early draft force themselves to read this, but still, the irony of Uncle Jack’s words isn’t lost on me.

Atticus Finch gives Scout another valuable lesson when he patiently allows his daughter to rail against him and his expressed beliefs. Although it was difficult to read at times, their confrontation displayed the honor of hearing one another out, of confronting difficult conversations that would otherwise eat at you from the inside. Scout more than challenges Atticus, she throws everything she has at him. And Atticus never displays hurt that would stop Scout from saying what she needs to say. He remains a gentleman. When Scout comes to the realization that she must leave Maycomb, never to return again, it is Uncle Jack who again speaks truth to her, “You’ve had a busy day. It’s bearable, Jean Louise, because you are your own person now...you, Miss, born with your own conscience, somewhere along the line fastened it like a barnacle onto your father’s. As you grew up, when you were grown, totally unknown to yourself, you confused your father with God. You never saw him as a man with a man’s heart, and a man’s failings--I’ll grant you it may have been hard to see, he makes so few mistakes, but he makes ‘em like all of us...We wondered, sometimes, when your conscience and his would part company, and over what....well, we know now.

Jack explains to Scout aka Jean Louise, why he had to be the one to say all this to her, and why it could not be her father, “You wouldn’t have listened to him. You couldn’t have listened. Our gods are remote from us, Jean Louise. They must never descend to human level...(Atticus) was letting you break your icons one by one. He was letting you reduce him to the status of a human being”.

Atticus is a literary character, beloved by all who read To Kill a Mockingbird. I will continue to love him in that book, but I can also understand the Atticus that appears in Go Set a Watchman, and although this Atticus isn’t the beloved saint of a man some wanted or needed him to continue to be, I admire the transition and the growth that the flawed Atticus allows Jean Louise.

Miss Lee, I thank you. I thank you for showing me more of the childhood experiences of Jem, Dill, and Scout. I laughed at their “Revival” play and when Jean Louise nearly killed herself on September 30th. I thank you for the tears I shed--they were cathartic. I thank you for trusting me to see this book as a companion text to TKAM. I thank you for letting the writer within me confirm that a classic novel’s writing doesn’t happen in the first draft. I thank you for explaining that Go Set a Watchman “is what it is”, a writer’s initial exploration of characters and conscience. I thank you for embracing the suggestions made by your editors decades ago and for the work you put into this book to create from it, To Kill a Mockingbird, and I thank you for allowing me the pleasure of seeing the future journey of  many of these beloved characters, especially Scout. I like her. I like her so very much. Most of all, thank you for reminding me that “every man’s watchman is his conscience”.
Posted by Anne at 4:16 PM